Warwick’s campus will this week once again be graced by the presence of the celebrated Koan sculpture, which has been out of sight since mid-2008.

The Koan, or White Koan, was created in the 1970s and until nearly two years ago stood on the university campus outside the Warwick Arts Centre, opposite Costcutter.

However, in 2008, the Koan was removed in order to allow for the redevelopment of Butterworth Hall and the re-landscaping of the area between the Arts Centre and the nearby multi-storey car park.

Now though, after many months of building work to improve this area, the Koan is returning. It is scheduled to be put back on its plinth outside the Arts Centre at midday on Tuesday 18th May.

Arts Centre spokesperson Katie Anderson tells of the excitement surrounding the return of a structure “beloved by generations of Warwick students.”

“It is at the centre of some of the campus’ urban myths,” she continues: “that it stood over the tunnel which allowed senior staff to escape from their neighbouring headquarters, that it was the nose cone of a failed Apollo mission, or, indeed, that someone lived in it.”

The six-metre high structure was designed by artist Lilian Lijn and purchased in 1972 by the university. Its name is a pun on its conical structure and ‘koan’, the Buddhist quest for questions without answers.

With the campus relatively young at the point when it was bought, the sculpture truly became a part of the identity of Warwick. There was even at one stage a Union society called the Koan Society, and during its time here it was the subject of many cartoons and comments on student life.

Nevertheless, many of the current crop of Warwick students will not have had the Koan on campus during their time here and may never have seen it at all.

“Warwick is a pretty fluid place and there’s constantly students coming and going; most of them probably won’t see it as iconic,” said one student.

Regardless, some students are more positive about the return of a sculpture that has been a defining part of Warwick’s image for nearly four decades.

“It’ll be nice to have such an iconic part of Warwick’s aesthetic back on display,” said one second-year Philosophy student.

White Koan is a part of the University of Warwick Art Collection. An exhibition of works from this collection entitled ‘Destination’ is currently on display in the Mead Gallery at the Arts Centre. It is open from noon until 9pm Monday to Saturday, and admission is free. 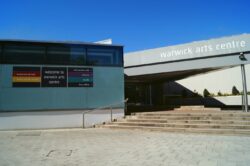