On Saturday 20th March, over a dozen Warwick students joined with thousands of anti-fascist demonstrators to march against the English Defence League (EDL) in Bolton.

The march, organised by Unite Against Fascism (UAF), was planned as a counter demonstration to the EDL, who had organised a march through Bolton city centre, culminating in an assembly in Victoria Square.

The EDL is a controversial right-wing group that purports to campaign peacefully against what it considers “militant Islam”, although many, including the UAF, consider it to be a fascist organisation similar to the National Front in the 1970s. The UAF is a broad left coalition of various Trades Unions and political groups.

The majority of the Warwick students travelled to Bolton on a coach with the Coventry UAF branch and arrived at Victoria Square in Bolton in the late morning before the EDL started to arrive en masse.

The counter demonstration had particular resonance for the Warwick group as Kevin Gately, a student from the University, was killed at a similar anti-fascist rally against the NF in 1974, allegedly by a truncheon blow from a mounted policeman. Out of respect for this, the Warwick group’s banner read ‘Warwick Unite Against Fascism: R.I.P Kevin Gately 1954-1974. Not forgotten.’

Throughout the day the two groups each occupied one half of the square, separated by a police barricade. Both the EDL and UAF brought banners and placards. A number of English, Israeli, and US flags were also waved on the EDL side.

The UAF held an open mic throughout the day, and protesters shouted a number of chants and slogans, the most common including the repeated line “we are black, white, Asian, and we’re Jews” -sung to the tune of ‘She’ll Be Coming Round the Mountain’- and “unemployment and inflation are not caused by immigration; bullshit! Come off it! The enemy is profit!”

Police figures estimate the UAF protesters numbered around 1,500, and the EDL 2,000 although estimates given by the UAF on the day suggested the ratio favoured the anti-fascist demonstrators by as much as three to one.

Aidan Barlow, one of the Warwick organisers, spoke to the _Boar_, calling the demonstration “a partial success”, an assessment he extended to Warwick’s involvement. “The truth is, outside of anarchists and one or two others, we didn’t get enough people to go to Bolton…Future efforts from Warwick must be to fill a coach. We can only do this by following up what we have already done in terms of getting people interested…Anti-fascist activity is just as important and vital today as it was when Warwick student Kevin Gately was marching back in the 1970s.”

As to how this ought to be achieved, Barlow added, “we must constantly argue that the causes of the problems we face are not brought from outside. Rather they are inherent within the capitalist system itself. Problems such as mass unemployment, low wages, attacks of living standards, housing, pensions and working conditions are all attacks made by bosses, not by immigration. This is essentially the message we need to transmit far wider and far clearer to those who feel the effects of capitalism and feel anger or the need to blame easy scapegoats.”

The Greater Manchester Police made 74 arrests, predominately of UAF protesters, including the event’s organiser, Weyman Bennett. Speaking about the UAF, Assistant Chief Constable Garry Shewan, from Greater Manchester police, said, “there have been unwarranted attacks on police lines that have resulted in injuries. This is not a peaceful protest. We will take swift action when confronted with disorder.”

Many of those at the demonstration have continued to raise concerns about the severity of police force, however. Mounted police and dogs were both present, and UAF demonstrators were ‘kettled’ –a term used by activists describing how police lines are formed to contain a demonstration, allowing either one-way movement, or no movement to and from the protest zone- until around 4:30pm.

Chief Constable Shewan dismissed claims, of excessive force, stating that the police reaction had been necessary in order to tackle “the few hell-bent on violent confrontation” describing a number of those arrested as “agitators and trouble-makers”.

Whilst the majority of arrests, at least 55, were of anti-fascist demonstrators, the behaviour of the EDL has also been called into question. Throughout much of the afternoon EDL supporters threw coins, plastic bottles, lager cans, and even mobile phone batteries into the UAF crowd. From accounts given by a number of the Warwick group, several glass bottles were also thrown, shattering upon impact. Around 4pm the police finally removed the EDL protesters from Victoria Square.

Jehanzeb Khan, Warwick Students’ Union’s Anti-Racism Officer, explained the importance of counter demonstrations such as Bolton, despite the negative reaction of the Police. He said: “more ‘timid’ approaches that often centre around electoral strategies and working with the established order ignore the institutional racism of the system, and the role it has played in encouraging the process of ‘scapegoating’, which has facilitated the contemporary rise of fascism.”
“Resistance…must be brought out in the battle for the public sphere through counter demonstrations; a fight that when lost gives fascist and racist groups free reign to flood the area with hate crimes and provides them with enormous political leverage.”

Another EDL march is scheduled to take place in Dudley on 3rd April. 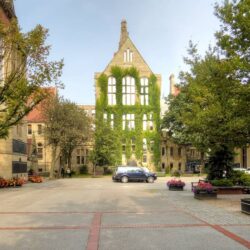