On the 20th of February, 11 of Warwick Judo club’s finest travelled to the cold and frozen north to compete at Sheffield University’s 13th annual international university Judo tournament. As university teams from across the UK and Europe arrived to battle it out for the coveted champion’s trophy, Warwick were in high spirits, with national Kyu grade (non-Black belt) Champion Sophie Cox, in their midst as well as a string of previous contest successes, everyone was confident of a strong performance.

Warwick A team started strongly romping through their pool stages sweeping all before them including a notable strong performance against Manchester University. Warwick B team had a tough pool including last year’s silver medallists and previous champions London Combined Universities. Warwick B fought valiantly against this very strong team, which had brought together all the best Judoists from across 12 of London’s university Judo clubs, containing a former national squad member and the heaviest player in the tournament. However, Warwick B’s best efforts were not quite enough to overcome these formidable opponents, though a special mention must go to newly promoted Black belt, Joe Rattenbury, who threw London’s enormous heavyweight spectacularly for Ippon, Judo’s equivalent of a knock-out. Warwick B’s run of misfortune was compounded by a narrow loss against Sheffield’s B team, elsewhere in the pool, which saw their competition come to an unfortunate and premature end.

Warwick A, however, were still in the competition and now moved onto the fiercely competitive, knock-out stages. A relatively straight-forward contest against Nottingham saw Warwick emerge victorious and move onto the next round of the competition where they faced a tough and wily Manchester side. However, Warwick maintained their fighting spirit and national champion Sophie Cox continued her domination of the light-weight women’s category with yet another win by a decisive Ippon, full point. This victory saw Warwick through to the semi finals, this was a great improvement on last year’s result when the team had disappointingly been knocked out and walked away with only a bronze medal.

In the semi-finals Warwick faced the home-side Sheffield, which had battled through their side of the knockout draw with strong performances at each stage. The team; Sophie Cox, Emma Beasley, Sam Harris, Tom Grandjean, Joel Hallam, and Adam Jones, now faced their toughest contest of the competition so far. Sophie maintained her outstanding performance by once again summarily dismissing her opponent with yet another Ippon victory. However, Emma and Sam lost their fights, with Sam narrowly losing a hard-fought contest by Yuko, Judo’s lowest score. Tom Grandjean drew his strenuous contest leaving Warwick’s fate and place in the final in the hands of Joel and Club President Adam. Joel stepped onto the mat against a strong opponent and the contest see-sawed back and forth with both players engaging frequently in protracted technical exchanges on the ground before Joel was able once again to take his opponent to the mat and secure victory with a hold-down. Warwick were now narrowly ahead against their rivals with two victories by Ippon to Sheffield’s one Ippon and a Yuko. With the teams fate resting on his shoulders Adam stepped onto the mat, a draw or a win would see them through to the final. Having previously lost to his opponent in a different competition there was concern in the Warwick camp about the outcome of the bout. However, the President stepped up to the plate and dominated his opponent before slamming him into the mat for a Wazari, Judo’s second highest score, and holding him down decisively for the victory.

The team now faced the formidable London, last year’s finalists, and a team which had early dismissed the multiple former champions, mighty German Sport University Munster, from the competition. Sophie Cox again produced a commanding performance to win by Ippon setting the team off to a strong start, however, Emma, Sam, Tom and Joel were all outfought and outclassed. This string of defeats made London’s overall victory certain and only Adam remaining to salvage some of Warwick’s pride. Despite a flurry of concerted attacks he was unable to throw his 23 stone opponent decisively and unable to cope with the Warwick team captain’s aggression the London heavyweight racked up penalty after penalty for passivity, leading the referees to award the contest to Adam for his superior aggression and fighting spirit in the face of his giant opponent’s refusal to stand and fight.

Going down 4-2 Warwick lost the final against their very strong and experienced opponents, but walked away with a fantastic silver medal, our highest ever result at this prestigious tournament. This result, the latest in a strong series of contest performances bodes well for this year’s BUCS where Warwick hopes to improve on last year’s medal haul of 1 Gold, 1 Silver and 2 Bronzes, the University’s best ever result at the tournament. 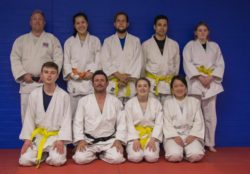