England stumble as Ireland remain on course for Triple Crown

Round three of the 2010 RBS Six Nations saw the French juggernaut tighten its grip on the Championship whilst English hopes of a Grand Slam were dashed. The Italians also secured an ‘historic’ win – one which they seem to achieve every other year against Scotland in Rome.

Wales and France were once again the guinea pigs for the Friday night money-making experiment. A right pain in la derrière for those in attendance. Welsh fans dashed straight from the office, pulling their red jerseys over their shirt and tie combo as they went. And the French – despite their 35 hour week – probably had to skip work too. A night game (with the roof closed) supposedly makes a great spectacle. A twenty point margin at half-time suggested anything but. The French had not played any rugby but twice found themselves under the posts as James Hook and Shane Williams handed out early St. David’s Day gifts. Alexis Palisson and Francois Trinh-Duc were the beneficiaries. Bar the grieving Bradley Davies the Welsh pack needs to take a long hard look at itself. The French obliterated the Welsh set-piece and dominated the collisions at the break down too. With no go-forward around the fringes the ball was hopelessly spun wide in the face of a Mathieu Bastareaud and Yannick Jauzion brick wall. Wales simply did not earn the right to go wide and were punished accordingly by the French blitz.

Yet the bleu midfield pairing has the turning speed of a tractor and Shane Williams’ prod through early in the second half caused havoc. A try beckoned and had it not been Luke Charteris but Leigh Halfpenny (where was he?) on the end of James Hook’s floated pass they would have been on the board. Wales crucially began to gain parity at the breakdown and won six or seven penalties on the bounce. France were out on their feet and were finally reduced to fourteen men when Morgan Parra was binned. Now was the time to chuck it about. Leigh Halfpenny, a distinguished finisher, dived over following Shane Williams’ money-ball. Yet just as we dared to believe they might do it again, the Welsh pressed the self-destruct button. First, Jamie Roberts missed the chance to put Hook under the posts, and then Lee Byrne inexplicably missed touch from five metres. Both deserved to be shot. Jonathan Thomas and Paul James finally conspired to put the French out of sight by gifting them sixty metres and then a shot at goal. All in all, by the time Shane Williams scored a sensational nineteenth Six Nations try (overtaking Gareth Edwards) it was too little too late. France had proved themselves no Scotland.

The Italians and the Scots did actually manage to produce an intriguing game of rugby, even producing a try between them. For a long time it seemed like a game of brinkmanship between Dan Parks and Mirco Bergamasco. They traded three points time and time again. Fascinating stuff. Allan Jacobsen twice dared to push his way over. Twice he was denied. The score remained 9-12. But then the impossible happened. An Italian backs move of menace. Craig Gower’s scissor move sent Gonzalo Canale thundering through the Scottish defence. His offload to Pablo Canavosio defied belief. Canale almost seemed accustomed to finding himself in broken field with just the try-scoring pass to give. His ball to Canavosio was timed to perfection. The replacement scrum-half jumped over. The Italians were now 16-12 up going into the final ten minutes. The Scots huffed and puffed but got nowhere. Cue wild Italian celebrations. So, the “Azzurri” have their much sought-after victory, meaning this year’s Championship will be classed as a success. On the other hand, it is nothing short of a disaster for the Scots. Now without an away win since 2006, they have been the victims on five of the six occasions the Italians have notched a tournament win since their inception ten years ago.

Their next opponents – England – played too much rugby on Saturday according to Martin Johnson. How dare they!? Strangely the cagey kicking bonanza against Italy was probably the strategy they should have employed against Ireland on a soaking wet day at Twickenham. Instead, England stumbled upon a stodgy prototype. They were stuck somewhere between the soporific strategy used in Rome and the play-what-is-in-front-of-you approach they are being implored to adopt. All they could muster was a push-over try from Dan Coles and Jonny Wilkinson’s usual haul of points. The midfield was non-existent and so too were the back-three. As per usual then. They did pass the ball through the hands at times but there was just no incisiveness. England made 112 passes during the game. Ireland made just 53 and yet outscored the English three tries to one. But this was a game England could still have won. Wilkinson dropped a goal with just nine minutes remaining to put his side 16-13 up. It is a testament to Ireland that they were able to maintain their composure in these final minutes. How many times have we seen this from Munster and Leinster in big European games?

Ireland won because they did the basics well and were clinical when England handed them opportunities. When Danny Care got caught with loose ball the Irish back row sensed their chance and poured over the ruck. Turn over ball was spun wide. The athletic Jamie Heaslip created the overlap, Jonny Sexton grubbered through, Tommy Bowe burned Lewis Moody. Try time. Danny Care then needlessly dumped Tomas O’Leary meaning an English penalty became Irish. Not for the first time his temperament had got the better of him – Care should have been made to walk home from Dublin last year. Ireland secured their own ball (despite his crap scrummaging, John Hayes is actually a great lifter). Sexton and Keith Earls then backed themselves in a two-on-two on the blindside. The latter squeezed in. Paul O’Connell continued to rise majestically. It has been said that O’Connell’s breathing patterns change quite visibly when he calls himself to receive at the line-out. Few teams seem to pick up on this. England certainly didn’t. The ball was patted down to O’Leary who teed up Bowe – arguably the best winger in northern hemisphere rugby – to run a fabulous line past the despairing Wilkinson. Now more than three points behind, England were basically out of it. Ireland’s tackle success rate was 100/101. There was no going through them.

The final two rounds of this year’s Six Nations are going to be interesting. France currently have a points difference of +38. They face Italy in Paris next so by the time England try to derail them on the final weekend they could have somewhere near +60. Ireland currently sit on a measly -1 and England on just +14. England would require two monumental performances (which frankly they do not look capable of) to rectify this deficit and steal the title away from the French in Paris. Basically the Championship is going to “Les Bleus”; we just wait to see whether the “Grand Chelem” goes with it. There is still plenty to play for however. Ireland can win the Triple Crown in two weeks time against Wales, whilst Scotland must beat one of Ireland and England to avoid the wooden spoon. It was during the early hours of Saturday morning – in the car on my way back from the Millennium Stadium – when I realised that it is just Wales who now have little to play for but pride. All seven of Wales’ tries this year have come in the second half. In the first half they have shipped 58 points, scoring just 12. 4th place beckons. Great. All I had was another bloody traffic jam to console me. Thanks for nothing tournament organisers – please send your rich television friends elsewhere. Fat chance! 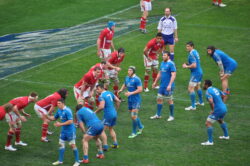