Warwick Athletics and Cross Country has overcome numerous injuries to reach a successful end to the cross country season.

The team achieved their goal of remaining in the top division of the Birmingham League in a 10 km cross-country race in Northampton on 13th February.

Several runners, including men’s captain James Robertson, were out with injuries, but the team’s remaining runners pulled off a stunning performance with a 12th place overall finish – just inside the relegation zone.

Luke Lambourne led the team to the finish, running an impressive time of 36:04 in the race, placing 49th overall. Vincent O’Sullivan came second on the team with a time of 36:41, placing 62nd. “The team ran brilliantly. It was a massive achievement to stay up [in the first division] despite the injuries,” said Robertson. He also commended the contributions of runners who were unable to participate in the final race, Andy Sheridan and Alex Houghton. Sheridan and Houghton
had excellent performances at the previous league races and helped the team come into the last race with a strong enough position to be able to avoid relegation.

The women’s squad also had an excellent race in West Bromwich on the same day, placing 9th out of 20 teams. Rachel Wood ran an excellent time of 25:53, coming in 24th overall. Women’s Captain Ellie Kitchen was the team’s second runner, in 44th place with a time of 27:36.

“This season has been consistently solid, with gutsy performances leading to a well deserved top ten placing in a highly competitive league,” said Kitchen. “In short, you go girls!” The team will have more races next term, including a Varsity Day track and field event at Westwood Sports
Centre against Coventry University. 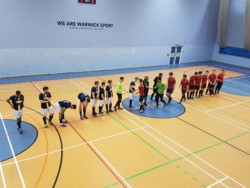