Arsenal close the gap as Chelsea slip up

The title chase took yet another twist this weekend – I knew it was stupid to make those predictions last week, they were proven wrong both inevitably and immediately. I said that Man City would really struggle against Chelsea this weekend and would have to be brilliant to get anything out of the match. For 45 minutes they were anything but brilliant and yet they achieved a resounding 4-2 win at Stanford Bridge. There was an eventful game of football hidden under all the tabloid rot which focussed on the meeting of Wayne Bridge and John Terry. As expected there was no handshake between the pair, Terry enjoyed the better start though as the early chances went Chelsea’s way. Lampard opened the scoring only for Tevez to equalise a few minutes later in first half stoppage time. Bellamy gave City the lead before Chelsea were reduced to ten men and Tevez grabbed a brace with the resulting penalty. Things got worse for Chelsea as Ballack was also sent off 5 minutes later. With nine men and without first-choice keeper Petr Cech they fell apart and Bellamy grabbed himself a second with a tap-in. With the game done the battle continued in the media, with whiter-than-white Craig Bellamy this time the one to chuck insults at Terry.

The unexpected defeat means that Chelsea are now only one point ahead of Man United (they disposed of West Ham in midweek ahead of the Carling Cup final) and it has left the door wide-open for Arsenal after it had looked so firmly shut just a few weeks ago. Arsenal took all the points in one of their hardest remaining fixtures, winning 3-1 away to Stoke City. Coupled with the result at Stanford Bridge the win should have made Saturday a great day for the Gunners as they clawed their way back to just 3 points from top spot, but the victory was marred by the horrific injury suffered by 19 year old Aaron Ramsey. The young Welshman’s right foot was left at an almost 90º angle to his leg after a high-speed collision with Ryan Shawcross. Sky and the BBC elected not to replay the tackle or offer any slow-motion close-ups so it is hard to judge how bad it really was, though it seems highly unlikely that Shawcross intended to hurt Ramsey, visibly shaken as he was as he walked off the pitch after his inevitable sending off. It was a case of bad timing and over-commitment rather than one of malice.

Ramsey became the third Arsenal player in less than 4 years to have suffered a broken leg from an opposition challenge, raising the question of whether the accepted wisdom that ‘Arsenal don’t like being kicked’ is contributing to the club’s extensive injury list. Not many teams like being kicked, especially not when it breaks your players’ legs. The game however took a very different turn to the one at Birmingham two seasons ago when Eduardo suffered a similar injury. With the game finely balanced at 1-1 after Bendtner had cancelled out Stoke’s opener which had been bundled in by Pugh from a (you guessed it) Delap, Cesc Fabregas showed us why he is now captain instead of William Gallas. The 22 year-old dragged his team through the shock, stepping up to slot in a late penalty and then squaring for Vermaelen to make the win safe. At Birmingham Arsenal had conceded a late penalty which Gallas had refused to even try and defend and they had effectively ruled themselves out of the title fight that day. This time they kept going and showed great team spirit, Fabregas’s celebration and the team huddle at the end said it all – they’re going to try and win it for Ramsey.

Very few points were picked up at the other end of the table. Of the bottom half only Bolton, Portsmouth and Sunderland came out of the weekend any better than they went into it and in the case of Pompey their win over Burnley will be for nothing when their nine point penalty for administration comes into effect. Bolton picked up a 1-0 win against Wolves and Sunderland could only manage a 0-0 home draw with a Fulham side tired after their midweek efforts in Europe. Wigan went down 1-0 away to Birmingham while Blackburn lost 2-1 to Liverpool. Benitez continued his war of words (and actions, remember his ‘it’s over’ gesture last season) with Allardyce after the game by sarcastically suggesting that Barcelona wanted to emulate Blackburn’s playing style. It was a joke which would have been funnier if Liverpool hadn’t become so stale in attack this season – the champions league hopefuls haven’t scored more than two goals in the league in 23 games. Spurs beat Everton 2-1 at home to keep their spot in the top four for another week. 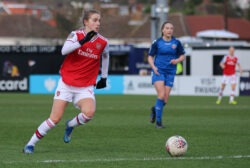 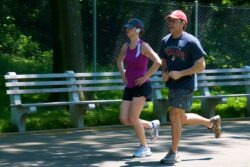 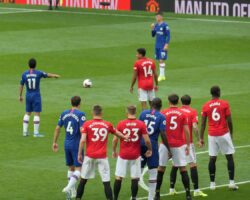