Lose and find yourself in Laos

I was queuing at passport control in the sweltering humidity, dollar notes gripped tightly in my sticky palm, when my companion informed me she had forgotten to renew her passport and might thus be refused entry to the country. I silently vowed never to travel with her again.

After a little begging and pleading on her behalf, we were set free into Laos, wallets 35 bucks lighter. Hindered slightly by the seemingly insurmountable language barrier, we boarded the public bus to Vientiane, our first destination and the capital of Laos. More a clapped-out van than a bus, the floor was covered with sacks of rice and clothes, and the door beside us remained perilously open for the entire journey (as close to air con as we could expect for 40p).

{{ quote A maze of wide streets on the east side of the Mekong River, with not a single high rise in sight, Vientiane must be the most laid back capital city on earth }}

We jumped off in an unidentifiable part of an unrecognisable town we hoped was Vientiane. Attempting to navigate our way, making the best of my sub-GCSE level French, we desperately sought some form of landmark, from which we could procure a tuk-tuk to deliver us to the hostel we’d spotted in the guidebook.

We quickly learnt while in Asia that, while a guidebook is certainly indispensible, it pays to look around when you arrive. In Vientiane for instance, we spent our first night in a recommended hostel, and spent part of the day searching around for a cheaper one to spend the next few nights. This way you can suss out more effectively which part of town you want to be in, while also checking out the rooms for yourself, as facilities differ hugely and are not always what the guidebooks profess them to be.

For instance, our guidebook pick, Souxhana Guesthouse, cost us around $14 per night, definitely the pricier end of the scale, but there were places offering dorms for less than a dollar per night, not to mention everything in between.

A maze of wide streets on the east side of the Mekong River, with not a single high rise in sight, Vientiane must be the most laid back capital city on earth. We spent the afternoon wandering in and out of the blissfully peaceful Wats (take care to cover your legs and shoulders – there aren’t always signs but it’s a big no-no) and checking out the cafes and hostels; followed by dinner at dusk at a makeshift open-air restaurant on the bank of the vast, muddy Mekong. Some of the best cuisine to be had in Asia can be sampled at such street stalls; with fresh fish, fruit and vegetables on display to choose from for less than £1.

For the less adventurous palette, banana pancakes seemed to be a dietary staple for many backpackers; with every budget restaurant offering their own version. My companion lived purely on these for several weeks; though with so much else on offer – and for fear of malnutrition – this is certainly not recommended.

For those of you who like to stay connected, internet cafes are everywhere, costing a few thousand Kip for up to an hour (approx. 14,000LAK = 1GBP). Most places also sell international call time. A lot of countries in the region have currencies which are impossible to use or convert outside, so it’s advisable to ONLY withdraw what you need, and spend it all before you cross the border. You can exchange your last bits of change at most land borders, although be prepared to get nailed on the rate as its usually just a woman wandering about with a wad of cash who makes it up as she goes. There are some ATMs in Laos, but take advantage if you come across one, as they aren’t commonplace; and it is definitely worth knowing that most places are happy to accept US$ (hostels, restaurants, some tuk-tuks) so try to always carry some of these, preferably in small denominations.

In Vientiane, Wat Si Saket is definitely worth a visit. One of the city’s oldest temples, set within beautiful, lush gardens, its outhouses shelter thousands of tiny Buddha statuettes in niches all over the walls, along with rows of large statues draped in gold cloths. Entry to such historical and cultural attractions is probably the most expensive thing you’ll find yourself shelling out for in SE Asia, usually working out at around $5.

After a few days we took a bus – complete with open-door air con – to Vang Vieng. As far as I can fathom, this sprawling backpacker haven exists purely for one reason: Tubing. The Namsong river, which flows to the west of the ramshackle town, is usually full of several hundred drunken backpackers bobbing around in rubber tubes between bars, or flinging themselves off rope swings. The river also separates the town from incredible Jurassic Park-esque scenery on the other side; in my opinion a visit to the dump is worth it just to see the jaw-dropping mountains, with their sheer limestone faces jutting thousands of feet from the earth. It’s also worth hiring a push-bike to explore the more ‘local’ parts of town, taking care not to run over any stray chickens, dogs or children running amok in the streets, while peering into open-fronted homes and shops.

Public buses tend to dump their cargo in the centre of town; as soon as you disembark be prepared for ten young men with hostel brochures to descend (and keep a keen eye on your backpack). Accommodation varies, so it’s best to check out 2 or 3 before deciding. We found a great family run hostel with a large, airy room and private loo for 30,000LAK (£2) per night. But bear in mind if you want air con, the price will double. Unless you know you can’t cope without it, I found it a good idea to try the first night with just a fan, as depending on the size of the room and the strength of the fan, you may be fine. If you decide not to sweat it out, there’s often no need to change rooms. In most places all rooms are fitted with air con but you pay extra for the remote to turn them on.

My tubing experience, on the other hand, I cannot say I particularly enjoyed. Possibly because I had recently been struck down by a rather violent bout of food poisoning. Or perhaps because, while taking a ‘river cruise’ in a less than watertight old canoe, we had run into a particularly large water snake wiggling about, halfway down the tubing course. That said, it seems a rite of passage for all visiting backpackers to sacrifice their search for an authentic cultural experience (!!) for at least an afternoon in order to run the gauntlet.

Again I would advise no more than a few days in Vang Vieng if you’re low on either time or money. The town itself made up purely of low budget hostels, vendors selling fake Havaianas, and endless tatty bars. An inexplicable obsession with Friends (TV show) has also pervaded the town; episodes are played on loop in every bar and restaurant which makes for a very surreal experience. The food is also poor; menus are identical and offer mostly greasy European and American food.

After a day or so sticking close to the toilet due to more food poisoning, we left for LP. It is to my eternal regret that I did not enjoy this fabulous city to the full. Its elegant, tree-lined boulevards sweeping down towards the Mekong are magnificent. My friend and I stumbled along the streets like zombies, unable function or cope with the heat of the midday sun. Needless to say a LOT of time was passed recovering in our nicely air conditioned room and playing Sudoku.

What I did see of LP I cannot recommend highly enough. Beautiful Wats and a fantastically vibrant night market, quirky hostels, cafes and riverside restaurants – all in a tropical, green, riverside setting – make this city a must-visit on any itinerary of SE Asia. Luang Prabang is also home to the Laotian Royal Palace, humble abode of the Royal family until 1975 when Laos became Communist. The palace is a wonderfully weird mix of Laotian and French Colonial architecture, set in manicured gardens with rows of poker-straight palm trees. It contains a delightfully eclectic mix of objects, including the Phra Bang Buddha, the city’s namesake. Another particularly remarkable room displayed gifts given to the Royal family by various heads of state, including numerous tea sets and, memorably, an engraved ink-pen stand from JFK himself. The internal walls are decorated in the Laotian style with multicoloured pieces of glass mosaic; hundreds of tiny temples, men and animals scattered about like ants. Eerily, the bedrooms have been left just as they were when the Palace was abandoned in 1975.

Entry is again only a couple of bucks, but beware peculiar opening hours in Laos; the palace is only open until 11am, and all the Wats close for the monks use at lunchtime, usually reopening around 2pm.

So I arrived at the tiny Luang Prabang airport, at the end of my trip through this beautifully bizarre country. Laos is like nowhere else in the world; no matter how long you stay, you will always leave determinedly vowing to someday return. It offers a truly authentic Asian experience, largely untouched by Western influence of the kind seen in Thailand; and this is why I would whole-heartedly recommend it to all professed backpackers and culture-vultures. 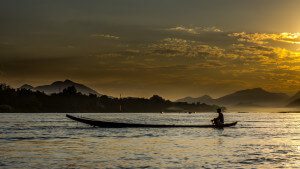 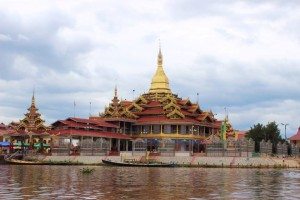