Cup Draw throws together the Big Dogs of 5-a-side

Week 6 plays host to reading week. This is a time when the population of
campus halves as the arts students take a deserved reprieve from their
habitual lie-ins and debauchery, seizing the opportunity to address a
mounting backlog of untagged photos and Jeremy Kyle. Yet, as industry
leaders converge upon campus to discuss matters of economic priority, the
hearts and minds of Warwick’s elite are focused on only one matter, the
business end of university football 09/10. Here, the only talk about
inflationary expectations concerns that of delusional mid-table wannabees.
The question on everyone’s lips is not about emerging markets, but emerging
5-a-side superpowers.

The Wednesday KPMG league is drawing to a close, with one game determining
who will be crowned champions. This year, there is more than pride at stake.
The winners will represent Warwick in the 2010 Varsity series against arch
rivals and future sub-ordinates, Coventry University. Ostensibly, the title
race will witness two teams battling it out for top spot. In spite of this,
which two teams these will be has yet to be determined. After a scheduling
mishap, the game between Obi Wan Kenobi Nil and Inter Erasmus was forced to
finish 7 minutes prematurely, an occurrence familiar to the majority of the
male population. At present, the force is with Obi Wan and providing they
can withstand the technical proficiency of their European counterparts, it
will be they who meet Raining Champions in the deciding game of the league.

Meanwhile, in the fiercely contested world of UW5, the ladders have been
frozen. Playtime is now over. Whilst the Paul Scholeses have floated their
way to Champions League glory like the creamy head on a freshly pulled pint;
the Wes Browns of this world can be found rooted at the bottom of the table,
abused by all they encounter, like a piece of chewing gum dropped into a
urinal. All the 5’s stalwarts have progressed safely to the next phase;
Raining Champions, Big Gay Ben, Machine Theory, Warwick ACS, Big Dogs and
James the Spatula all finishing in top 4 positions. Stat of the day: “Big
Dogs have amassed more goals than any other team in this year’s ladder
system, hitting the net a colossal 64 times.” Not even Ashley Cole can score
so frequently. The Champions League draw has raised no immediate concerns
for any of the big guns, with only group 2 resembling a potential “group of
death”.

Sometimes giant killing can take on a literal meaning in Warwick 5-a-side.
Picture, for arguments sake, a game between the Hong Kong society and the
Nordic society (or the Russian society, the Cypriot society, or the average
height society for that matter). Yet, as the last 32 became the last 16 in
the cup, giant killing was indeed the name of the game. One World Week
tournament winners Raining Champions were sodomized by
Cryfieldrootesredfernsupergoatscribmembersheretoplayseriousfooty, with ACS
losing out 5-4 in a closely contested battle with Fiji. The next round sees
a gargantuan clash between Big Dogs and Obi Wan, winners of ladders B and D
respectively. Will the former’s dogged style be enough to leave their
opponents in need of a full-time rub-down?

Next week, attentions will turn to the OW cup as we enter the quarter final
stage. With so many big names falling in the previous round, tensions will
surely be mounting. As election week approaches, we ask who will be the
Barack Obama of Warwick football and emerge as a credible threat to the old
regime? Alternatively, who will end up like John Prescott, with egg on their
face, pants around their ankles and the whole world pointing and laughing?
This, gentlemen, is Warwick football. This is what separates the men and the
boys from the Maths students. 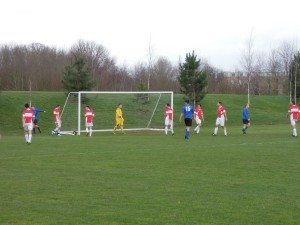