The University of Warwick Men’s Hockey 4th X1 breathed a huge sigh of relief as they returned home from Lincoln last Wednesday with a critical point which now takes them within touching distance of a place in the third tier of BUCS hockey next season.

The 4th X1 produced an energetic and tenacious performance which saw them into the lead midway through the first period.

Yet Lincoln battled hard, pinning back Warwick for sustained periods and their efforts were rewarded with an equaliser as they took a share of the points in a 2-2 draw.

After conquering their BUCS respective leagues, Harper Adams 1s, Lincoln 2s and Warwick 4s enter into a round robin playoff tournament with the top two teams qualifying for promotion.

On the back of an unbeaten season, amassing an impressive 28 out of 30 points on route to the title, the 4th X1 were beaming with confidence and renewed in energy as they made the trip north to Lincoln.

Conditions nevertheless were difficult; the scorching midday sun beamed strongly on the surface as Lincoln fans packed the Astroturf sideline creating a rather intimidating atmosphere in the process. And the supporters were sent into pandemonium just minutes into the game as Warwick failed to subdue their early nerves. The ball fell kindly to the Lincoln front man following a defensive mishap and he simply couldn’t miss from five yards out.

Warwick were for once in uncharted territory – on the wrong end of a score line, left with a mountain to climb. The response however was nothing short of inspired. An assault on the Lincoln goal began as the 4th X1 were awarded with a succession of short corners.

Simon Hughes came agonisingly close as his thunderbolt of a shot drifted inches wide of the left post. Meanwhile Richard Wildish’s effort, destined for the bottom corner, was blocked bravely by a Lincoln defender.

Nevertheless, Warwick were finally rewarded for their continued efforts.

A neat interchange of passes down the left flank saw George Osborne feed William Jones. The angle was acute yet the finish was calm and collected as Jones slotted home over the onrushing Lincoln keeper.

The rebound however fell to Carl Pugh who thumped home an emphatic half volley, giving Warwick the lead for the first time.

Complacency struck however as Warwick soon drifted into cruise control. Lincoln’s midfield began to assert dominance and minutes before the break they drew level, successfully converting a short corner.

Going into the break, the game was poised finely at 2-2. The 4s were fully aware they could still move up another gear yet this potential never really materialized as they found themselves under the cosh for the majority of the second half.

Warwick had Tomas Neary and Jack Kelly to thank who formed a formidable and resolute partnership at the heart of the defence. Goalkeeper Phil O’Hagan also produced a string of first class saves to keep his side in the game. Meanwhile Pugh thoroughly deserved his Man of the Match award for his tireless and spirited running throughout at the heart of the midfield.

A point apiece was probably a fair reflection yet emotions were mixed in the away team changing room after the game according to Jonathan Butcher, Warwick’s left midfielder, “In one sense a point is a great achievement since we were outplayed towards the end. Yet I think the boys are a little frustrated considering the potential we showed in the first half. One thing is for sure, we need three points and nothing less next week.”

The maths is now rather simple. Promotion will be ensured if Warwick can win their home playoff tie this Wednesday. No easy task considering the visitors, Harper Adams, have yet to be beaten this season.

Warwick 4th X1 take on Harper Adams 1s this Wednesday (29th) with a 2pm pushback. The game will be played at the Westwood Astroturf and all support is warmly welcomed. 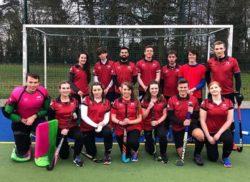 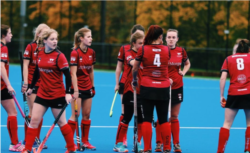 Why you should join… Ladies’ Hockey