The UK’s first ever Musical Comedy Awards have taken place in London, as a result of an entrepreneurial former Warwick student.

Ed Chappel, who completed an MA in Creative and Media Enterprises last year, founded his company Avin A Larf Ltd., after coming up with the concept as part of a requirement for the course. For one module he had to pitch a business idea to investors, and they were so impressed that they offered him the money to put his proposals in to action.

Chappel founded a website that allows anyone to upload their musical comedy videos. For the awards, a panel of judges chose five acts from a shortlist of twenty from the site to perform live at the Awards Ceremony for the title of ‘Best Act’. There was also a ‘Best Newcomer’ award for the best unsigned act.

Performances ranged from the ‘Best Act’ winners Adams & Rea, who rapped in Jamaican accents about litter, to Frisky and Mannish, a duet that reworked The Pussycat Dolls’ ‘Beep’.

The ‘Best Newcomer’, Jay Foreman, impressed judges with his song topics ranging from procrastination to ‘Chavs on The Moon’.

Chappel told the Boar that the event was “such a success” and featured “ten brilliant acts”.

The purpose of the awards, he said, was to “give a platform for musical comedians and raise the profile [of musical comedy]”. He described the genre as “diverse and unique”, and said that it “deserves all the attention it is getting right now”. 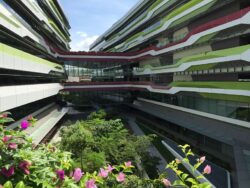 One in ten business start-ups are founded by students