Don’t let yourself get attached to anything that you’re not willing to walk out on in thirty seconds flat if you feel the heat around the corner”. The words of Robert De Niro’s Neil McCauley are heartlessly cold. But in many ways they fittingly encapsulate Michael Mann’s provocative and stylish study of moral decay. Heat – Michael Mann’s compelling crime film from 1995 – takes many of the customary conventions of the cops-and-criminals genre and reinvigorates them with an enthralling burst of hard-hitting, soul-centered drama. And much like its two central performances from Al Pacino and Robert De Niro, Heat sizzles through every scene with a rough, kinetic brutality that thrives on the menace and sheer epic sweep of its graceful yet edgy story.

{{ quote A coruscating picture of the causes, consequences and human costs of crime in a fragmented world }}

Packing as much provocative substance as flourishing style, Heat is a richly textured city story that remains as simple as it does grand. Set amidst a crumbling and alien backdrop of Los Angeles, the film’s characters feel startlingly real, and as we follow Vincent Hanna (Al Pacino) – a dogged, self-dramatising cop – in his pursuit to stop the cold, disciplined criminal Neil McCauley (Robert De Niro), it dawns on us that the true brilliance of Heat lies in its remarkable ability to illuminate the City of Angels as a sunken, smothering character in its own right.

As one would expect from a film highlighting the talents of Al Pacino and Robert De Niro, Heat is an acting masterclass where both Hollywood legends are outstanding as a pair of hard-edged characters facing the morally depleting borders of a crumbling urban wasteland. Mann finally provides us with the on-screen meeting between the two Hollywood giants that The Godfather Part II so teasingly denied. The film’s now famous coffee shop sequence remains an iconic moment of movie magic – and so it should, it’s the thematic foundation for the entire film. “The interplay is like two master musicians playing a duet”, Mann recalls. It’s more than that. In a world of such brutal realism and cold-blooded solitude, justice cannot separate a cop from a criminal; nor does the impending self-righteousness of a hero preserve the ever-fading line that separates him from the villain. And in this scene, the mirroring yin/yang nature of our hero and villain shines through; each is a tightly reigned reflection of the other; both seem weakened by the loneliness that their obsession towards a life of violence demands. While Hanna the cop and McCauley the criminal are equally as professional, they are also equally as bitter, together traversing the spillage of each other’s actions whichever side of the moral divide they inhabit.

Drenching itself in a musky-saturated pastel twilight, the final cop-versus-criminal showdown between Pacino and De Niro may sound conventional on paper, but the film’s affecting if understated finale infuses itself with a rare feeling of unhopeful discourage into the customary triumph of good over evil. Only at this moment do the shadowy eyes of Pacino’s Hanna finally begin to convey a sense of remorse. Regardless of which side of the law these characters belong on, whether they live for crime or live to prevent it, Michael Mann’s epic crime saga is a real triumph that perfectly weaves character and profound themes with action, excitement and Mann’s now unmistakable cinematic technique, creating a coruscating picture of the causes, consequences and human costs of crime in a fragmented modern world. Even today, one might argue, Heat continues to stand head and shoulders above its many peers, retaining its deserved reputation as perhaps the defining treatise on the contemporary crime film.

An altogether powerful, moving and electrifying thriller – Michael Mann’s captivating classic about the indistinguishable line that separates hero from villain remains as empowered by its director’s trademark kinetic action and compelling visceral drama as it always has done. And the film’s unforgettable final shot – a pastel LAX skyline as Pacino takes the dying hand of De Niro – is a beautifully tragic moment that is fittingly devoid of any closing victory. The final note is ultimately one of human frailty. Both men, formerly defined by their strength and individualism, reach out to take the other’s hand. Cops and criminals really aren’t so different after all. 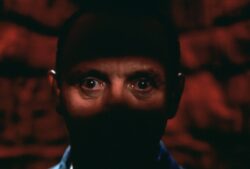 The killer’s gaze in ‘Manhunter’ and ‘Silence of the Lambs’