The next person you see around Warwick wearing a society hoodie or t-shirt, I want you to scrag them around the neck, turn down their collar and see what brand makes their clothing. Not because I advocate the casual invasion of personal space, but because there’s a very good chance your clothes are made by Fruit of the Loom. This company is ubiquitous, and understated. It is also, sadly, the latest addition to the list of abusers of workers’ rights.

Earlier in the year, Russell Corporation, a subsidiary of Fruit of the Loom, announced the closure of a University apparel assembly line in Honduras because of its workers’ attempts to form a trade union. As one facility supervisor was quoted, “the workers will starve because they got involved with a union”. Consequently, around 1,800 families are losing their livelihoods, and ability to subsist. This is horrendous not only because union busting violates national and International Labour Organisation labour standards –not to mention the supply codes that the Loom has signed up to concerning freedom of association- but also due to the fact that this kind of thing still happens, by and large, unnoticed. At best we opt to shake our heads in aggravating stoicism, whilst venting none of the outrage we ought to be consumed by. How does the old saying go? ‘The Devil’s greatest trick was to convince the world he did not exist’.

It is certainly true that regular followers of my columns will be well acquainted with the abuse I levy against Capitalism. Nonetheless, credit to the system’s endurance, this is one horse that, whilst flogged to within an inch of its life, still refuses to die. I do not contrive to implicate it in all the worldly woes against which I rage; much like the joker in the pack, it compliments any hand of its own accord. I find it hard to believe that we would be so indifferent to the suffering of our fellow workers if it was taking place on our own doorstep, in Coventry or Birmingham… No, whether by design or not, the decision to outsource labour to parts of the world as far flung as Honduras, has divorced from our own concerns the reality that human beings have to live every day on the production line. We are alienated from those who, were the proximity a little closer to home, could easily be members of our family, friends, co-workers. The Devil has well and truly blinded us to the affinity and solidarity we ought to feel.

I live half the year in Dorset, an unremarkable county with no notable history in the last couple of millennia, save for one pivotal moment in the development of labour rights here in the UK. Some of you may be familiar with the Tolpuddle Martyrs. In 1834 a group of seven men swore an illegal oath, in essence attempting to unionise, and were consequently sentenced to be shipped to Australia. The convictions were overturned a couple of years later, and the first battle was won for freedom of association. In 1934 the TUC celebrated the centenary of the event, and every year now an assorted mass of hippies, trade unionists and activists gather for a weekend in July to drink cider, heckle New Labour speakers, and gaze lovingly at the messiah-like presence that is Tony Benn.

I mention the Tolpuddle Rally for two reasons. Firstly to cast into relief the fact that freedom of association is so ingrained into our labour mentality that its gradual ascension to the position of societal norm was already taking place 170 years ago. Secondly to suggest just how outrageous it is that the Loom has started abrogating those same workers’ rights; for years they have supplied the garments on which stall after stall of left wing apparel at Tolpuddle printed their anti-Thatcherite slogans. Even my beloved Boar Comment t-shirts are Fruit of the Loom.

But there is a sunny note to finish on. Last week, People and Planet organised a demonstration along with students at Aston University near Birmingham to protest against the action taken by the Loom. Whilst it was largely a publicity stunt for the media –the only onlookers at the industrial park were police and a forlorn looking Loom employee hunched under an umbrella- the significance of the action should not be underestimated. Indeed, students, by virtue of their copious university apparel, make up a significant chunk of the Loom’s customers. We are best placed to put pressure on them. Already in the USA eighteen universities have cut ties with Russell Corporation (the Loom subsidiary), causing over $5 million of supply contracts to be lost.

Seen in the context of Warwick’s recently reinvigorated campaigning culture, we should be optimistic. The efficacy of our action will grow, but only if we reject the Devil’s illusory barriers to global worker rights and affinity. We must shout out against complacency, and shout out against such flagrant wrongdoing, wherever it may be. 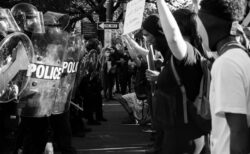