Paris of the Middle East

In the month prior to departing, my early morning ritual kicked-off everyday in the same way: a detailed glance at BBC News’ Middle East section. The Lebanese parliament had been disbanded for failing to elect a president, Syria was flexing its muscles, yet the paramilitary wing of Hezbollah remained fairly languid – perhaps taking a break between Christmas and New Year. Whatever the case, I wasn’t going to waste the £400 I’d spent on a return ticket to spend New Years in Beirut; I wasn’t going to miss out.

Arriving shattered into Beirut’s airport (which is periodically occupied by Hezbollah) I expected a lengthy cost-laden visa kerfuffle; instead, a friendly, immaculately presented official wished me a good stay in squeaky clean American; should I wish to extend my stay longer than a month, I’d need to fill in a short form.

I didn’t and hopped out into a taxi and the cool Beiruti night air with my friend Anup. Thus ensued an Arabic exchange which I barely comprehended; all I can say is that it involved various hand-gestures, raised voices and shrill tones; the upshot of it was that we paid the local – and not tourist – price for the trip back to the hostel. Anup, believing it to be in my interest, taught me the two most important pieces of Beirut taxi etiquette: first, the mock-aggrieved door slam to express distaste at an over-inflated price; second, an aggressively intoned ‘la’ (no) at any price higher than you’re willing to pay.

Both of these gems worked without fail throughout the trip. I was surprised to discover what I’d thought to be a big back-pack next to me moving – it turned out that it was a man (we’d taken a service-taxi, sort of like a mini-mini-bus, which would pick up multiple passengers before heading to our destination). These cabs need to be waved at aggressively should you wish to get in one and will not stop for you if you’re crossing a road – making getting from one side of a street to the other a potentially lethal walk.

Not wishing to miss out on my first night in the Middle East, we headed straight out to hunt for a decent bar. The epicentre of Beirut’s nightlife is spread out over a nexus of streets surrounding the Rue Monot. Here, in tiny-bars packed to the rafters, is where it’s at; drinks cost European prices but are worth it for the atmosphere. Just close by is Beirut’s bustling commercial and financial centre, where large news organisations brush shoulders with investment banks.

It’s not difficult to see why the New York Times anointed the city ‘The Best Place in the World to Visit’ in 2009; the city has come along way from the bigoted apocalypse depicted in P.J.O’Rourke’s Holidays in Hell published ten years earlier. Beirut’s bars are fantastic, packed and bubbly; its clubs, however, demonstrate an unwarranted, undeserved and frankly unpleasant level of snobbery I’ve never before encountered: to put it politely, Beirut’s doormen make their Moscow equivalents look like friendly old ladies.

The Lebanese, despite having one of the most educated, urbane youth of the Middle East – boast none of the cheery friendliness and hospitality their Syrian neighbors have in abundance, rather an aloof haughtiness. New Year’s Eve provided the perfect example of this. My friend and I, who’d even put shirts on for the occasion, combed our hair and dispelled our usual deshabille, wandered into a bar where we’d booked a table (twenty dollars reservation fee): the – already excessive – price of drinks had strangely doubled during our stay (we’d been there thirty minutes) and they told us that we couldn’t – despite their plentiful stocks – buy beer that evening. If we wanted this, we grumbled angrily, we’d have headed to Switzerland.

Having been brushed away and deemed too shabby to rub shoulders with the unpleasant Beiruti nouveau riche, we decided we’d see in New Years with an al fresco shisha and herbal tea just around the corner from the stunning ‘place de l’etoiles’ (French: square of the stars). Re-crafted after the bombings of the early nineties, the sandstone coloured, elegant buildings and suave cafes housed in them have a touch of the Parisian about them. This historical centre was almost deserted (should trouble break out, our landlady informed us, the square would quickly be taken) – so we had it almost to ourselves, a shisha bong and an overwhelming sense of tranquility.

Said shisha receptacles are ubiquitous in the city; indeed, throughout Lebanon. Our favourite cafe – in which we wiled away many afternoon hours – was the Bay Rock cafe just off the Corniche and next to the Pigeon Rocks. Here people from all shades of Beirut – from the office worker to the taxi driver – seemed to congregate for a relaxed shisha to blow away the cobwebs of their day and see the sun setting over the Pigeon Rocks – one of the most beautiful sights I have ever witnessed. We’d munch houmous, pitta breads (which would come in packs of ten) and various brightly coloured vegetables I neither knew nor now know, the name of.

Deciding to take advantage of a hangover-light New Year’s Day, we decided to hop in a multi-taxi (a sort of mini-bus which drives between various cities and picks people up at unappointed locations along the way) to Biblos (Jbail) a picturesque fishing town about an hour from Beirut. Believed to have been built almost 5000 s B.C, it is widely held to be the oldest continually-inhabited city in the world. We strolled languidly along the portside, now filled with a few small boats, but once a bustling and dynamic port, stopping off at one of the rustic looking cafes to enjoy a jet black, eye-popping coffee followed by a less hyperactive real peppermint tea.

The next day we again woke early to head off to the Roman ruins of Baalbeck. Baalbeck, known at the time as ‘heliotropolis’ (city of the sun) had been one of the largest sanctuaries at the height of the Roman Empire. The ruins, like those of Palmyra in Syria, are sometimes numbered amongst the wonders of the world; rightly so – in 1984 they were classified as a World Heritage Site in 1984. Here we once again encountered the hospitality I had – complacently – come to expect from the Middle East.

The ruins are surrounded by hawkers, desperate to sell you a Hezbollah t-shirt in garish yellow for any price – seemingly unaware that a luminous yellow shirt featuring the organisation’s ak47 logo is not at the top of many tourists’ souvenir shopping list. A wizened old-man whose cafe sported numerous tatty Hezbollah flags, invited us into his shop out of the rain, making us Turkish coffee on a tiny camping-stove and chatting away with us in impeccably polite broken-French: business hadn’t been good recently, he said – Israeli soldiers had entered the city’s hospital during the Lebanon-Israel conflict of 2006 and tourists had been wary ever since.

Then came another trip in the multi-taxis, the mini-vans that were our preferred mode of transport throughout the trip. All along the way we saw billboards of idyllic looking happy people: children jumping in the air, and old man looking contentedly at a well-ploughed field. Underneath, in bold type: U.S AID; winning hearts and minds was key in Lebanon, our landlady told us – and Hezbollah ran many public organisations, giving it an everyday link to the population which the U.S hopes to counter through these billboards.

The next day we decided – on the advice of our slightly sagacious (and very voiciferous) landlady – to head to Tripoli, a town I had never heard of, but had a sneaking suspicion was in Libya. The city, it transpired, the second largest in Lebanon, famed as the home of the celebrated Baklava sweets (which we sat and gourmandised for around an hour), was a bustling, dirty, lively mess. Full up of baklava, we headed to the souk, one of the biggest in Lebanon. Here we saw meat and animals kept in conditions that would give the R.S.P.C.A a heart attack: ten chickens kept in cages that would have farmers in England imprisoned should they put a fifth of this amount in there; brown-looking meat carcasses surrounded by innumerable flies. Once again, on a mound towering above the city – we traipsed around another breath-taking set of ruins – the Citadel of Roman de Saint-Gilles, which has been destroyed many times over the years (the parts that do remain were largely built during the Ottoman era.) Here we were rewarded with a fantastic panorama of the city, giving us a sense of the Lebanon Beirut can never really convey.

Those expecting authenticity and soul in Lebanon’s capital will be sourly disappointed. Formerly nick-named ‘The Paris of the Middle East’ and indeed laden with people who seemed to think they do live in Paris, it’s overpriced and a tad disappointing; a trek outside the city, even one as short as thirty minutes will be rewarding; not worth a long-stay in its own right, the city is most valuable as a spring-board from which to see the country’s vast cultural gems; it should be approached as such. 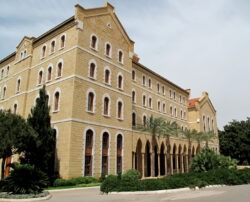 Lebanese universities seek to rebuild after damage by port blast

Beirut blast: Who is to blame?

Why train travel is still a contender