Popular culture today is dragged along like a puppy on a leash by the media and its craze for celebrity.

When Victoria Beckham wears a new style of tiny jacket teenage girls across the country can be seen sporting the same within weeks. If Kate Moss is spotted watching an unknown band they are almost guaranteed a hit, and whenever Richard and Judy review a novel it hits the bestseller list immediately. The media presents us with ideals of perfection to follow and the tourism industry is no exception to this bizarre rule of causality.

The hordes of tourists currently invading quiet Greek island Skopelos prove that celebrity sells when it comes to holiday destinations too. The so called ‘Mama Mia effect’ has seen hundreds of tourists trek to the film’s setting, a forested island in the Aegean Sea. Until its release last year, Skopelos was known only for plums, pears and pine trees. With a population of just 4,696 and without an airport, it had managed to escape the fate of other gaudy Greek resorts.

Nonetheless, the success of the film is perfectly timed to boost this struggling economy which depends heavily on tourism. In the ABBA musical Greece is idyllically figured, much like it was in the 1970s when the tourist industry there first boomed. As a result many have praised the film as a much-needed advert for the area, despite worries that this influx could destroy the unspoilt beauty of the island.

Mama Mia is not alone; films have long been recognised as a great marketing strategy to boost tourism. Australia, released this year, is expected to increase tourism down under, particularly to quirkier destinations like Darwin, where much of the filming took place. The Lord of the Rings trilogy acted as a stunning advert for New Zealand and Captain Corelli’s Mandolin did more for another Greek island, Cephalonia, than anyone could have imagined.

Another powerful factor influencing tourism is the holiday choices of stars themselves. Brad Pitt and Angelina Jolie’s choice to make Namibia the birthplace of their child, Shiloh Nouvel Jolie-Pitt, was welcomed by its tourism board.

In addition to spending a fortune at a luxury resort in the town of Swakopmund they helped put this reasonably unknown country on the map. There a probably millions of Americans who had never heard of the South West African country before Pitt and Jolie’s extended stay there.

In fact the government valued this celebrity endorsement so highly they were willing to risk their democratic reputation in order to attract the attention of US gossip magazines. Despite a media freedom which is often held up as a standard for the rest of the continent, the Namibian government imposed strong restrictions during the celebrity couple’s stay.

They deported three French journalists and arrested a South African photographer to make Jolie and Pitt feel safe enough to have their baby in the country. As a result Namibia maintained a place in worldwide news for months and the tourist industry there is on the rise.

Adventure travel too often takes a lead from the celebs. Ewan McGregor and Charlie Boorman’s hit series, The Long Way Round, was not only a huge TV success, but also inspired hundreds of other bikers to take copycat trips. However, the pair were in turn influenced by legendary motorcyclist Ted Simon, whose book Jupiter’s Travels provided the idea for their expedition.

Due to the media, all our travels, even those of the celebs themselves, are invested with cultural and historical references. There’s no such thing as an original travel idea, but that is what makes every journey important, it is part of being human that we necessarily follow in each others’ footsteps.

This is proven by the fact that modern celebrities are not the only ones to draw hordes of tourists to destinations across the world. Historical figures are of course great tourist attractions: that’s why Yorkshire is so keen to claim Robin Hood as their own. (Can I just say, as a Nottingham girl, he’s ours. Hands off!)

These kinds of attractions can be big business for the industry: London’s Whitechapel hosts daily ‘Jack the Ripper’ tours for those with enough morbid curiosity to see the exact spots where he murdered his victims, and they don’t come cheap.

Literature too has had a profound impact upon travel trends historically. Wordsworth and Coleridge pioneered the idea of walking as a pursuit rather than merely the necessary burden of the poor. Michael Palin, who has himself inspired countless travellers, followed in Ernest Hemingway’s footsteps in another hit travel series based on the memories of people who knew the American icon.

Kerouac’s On The Road is largely responsible for the ultimate ‘cool’ travel mode, the road trip. Innumerable travel writers and fans have traced his route across the US and an industry has sprung up along it. Thanks to the beat generation writers, San Francisco is still seen as a hub of cultural activity and the Vesuvio café in the centre of the city, where Kerouac was once a regular, thrives on his reputation.

Nowadays our fascination with celebrity extends to every reach of life and we’re so interested in where they like to go that The Times even has a weekly feature, ‘My Hols’, which focuses on the travel penchants of a variety of stars. Who wouldn’t be fascinated by the fact that Moby enjoys bungee jumping in Patagonia while Johnny Vegas loves nowhere better than Scarborough?

When Colin Firth isn’t prancing around on a Greek island proving that there’s a reason he never became a rock star, the West of Scotland and the Sahara are his haunts of choice. Personally I’d give anything to run into him relaxing by Loch Fyne, which he admires for its ‘impossibly romantic glow’. Scotland suddenly seems a very attractive destination.

It’s a phenomenon that has existed for thousands of years; since the birth of religion people have been travelling the routes of their idols hoping to gain some new insight into them. With new media forms and the increasing ease of travel these trips are no longer considered pilgrimages, but ultimately that is what they are.

Whether we admire a famous figure for profound religious teachings or a particularly impressive performance of ‘Dancing Queen’, following their footsteps is still aspiring to a perceived level of perfection. Surely there can’t be any harm in that. 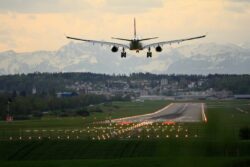 Swimming against the tide: the countries opening for summer holidays