This year has seen a dramatic rise in applications for both undergraduate and postgraduate places, as people try to maximise their employability in the face of a growing recession.

The rise, Parkes-Harrison continued, “is directly attributable to the recession as lots of people are looking to take a year out and boost their C.V.”

University Applications authority UCAS has declared a total of 465,000 applications this year – a rise of 34,000 (7.8 per cent) on last years’ figures. Many figures had previously predicted a drop off in the number of applications – believing that the rising cost of a university education would act as a deterrent.

The figures come just months after the government was forced to make a U-turn on its own higher education expansion plans after discovering that it has underestimated the amount of student grants it would need to pay this year, thus creating a funding gap of nearly £200 million. This has resulted in strict rules stemming university expansion (which had been set to rise by 5,000 this year) and with punitive measures forecast for those universities which defy the government’s intentions.

The rise in applications has been further strengthened by a dramatic rise in applications from international students (almost 81 per cent nationally and 40 per cent at Warwick), as people take advantage of the falling strength of the pound and the stated desire of many British universities, Warwick amongst them, to court them.

Applications from mature students have also increased, with people wanting to re-skill in time for the economic recovery.

Postgraduate applications from foreign students to neighbouring Birmingham University have soared, with the university’s officials declaring an 18 per cent rise in applications from non-E.U international students. Overall applications for taught postgraduate courses have risen by 127 per cent from Home and EU students as people seek to insulate themselves from the shrinking job market.

The increases, all sides have agreed, will foment a fierce competition for places. 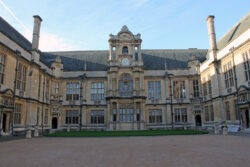 Universities set their own entrance exams amid A-level results chaos