The debut of the second series of Gossip Girl aired our screens last week, and I have to admit, I’ve missed it.

In case you’ve never seen it, Gossip Girl is a highly addictive mix of sex, glamour and awesome clothes which revolves around the lives of socialite teenagers growing up on New York City’s Upper East Side. They attend elite academic institutions while dealing with friends, family, love, wealth, and most importantly… gossip. The filthy-rich main characters pull you into a tumultuous world where teens have total power. They wear Channel to school and Cavalli to clubs; have private cars and servants; and are masters in the art of getting their own way. If all of this sounds unrealistic to you; think Paris Hilton. Cecily Von Ziegesar, whose series of novels by the same name are the basis of the show, created her stories from the lives of an exclusive cluster of real life Upper East Siders from which Hilton emerged when she was still too young to be able to legally drink.

The drama is narrated by an anonymous blogger (Kristen Bell) who chronicles the lives of the “popular” socialites at Constance, a preppy school for over-privileged kids. Gossip Girl’s world, and her gossip, revolves around the fascinatingly soapy story of Serena Van der Woodsen (Blake Lively). The first series began with Gossip Girl announcing the return of ‘it’ girl Serena. A year before, she mysteriously decamped for boarding school, leaving behind BFF Blair Waldorf (Leighton Meester); Blair’s boyfriend, Nate Archibald (Chace Crawford), and sleazy but gorgeous sidekick Chuck Bass (Ed Westwick). In the first series Gossip Girl unearths the mystery behind Serena’s disappearance and presides over a complete social about face. By the end of the season, Blair has given up on Nate and instead ends up travelling with his best friend, Chuck.

This sounds like a shallow copy of The Hills, but while their wealth and privilege brings similar drama, social scandal and an obsession with reputation, there’s a sense of aspiration to be better which makes Gossip Girl a far more worthy use of your time. It’s true that these kids are living in a total fantasy world, where they have as much power as their wealthy parents, but they’re redeemed by their complex characters. All of them have faults, but they’re ultimately good people, and I’ve developed a real attachment for each of the characters. Because of her pretentious mother, Blair has become selfish and conceited, but her genuinely loyal friendship (despite certain jealousy and drama) with Serena is touching, and even more crucially her love for the mysterious and complex Chuck is completely intriguing.

Another reason this drama keeps us entertained is the addition of Dan and Jenny Humphrey, middle-class kids who don’t fit in but soon become swept up in the tide of gossip and scandal. They gain huge amounts of audience sympathy for their attempts (and often failures) to fit in. The lengths they would go to make them seem admirable, but also teach us a valuable lesson about the pitfalls of the glamorous world. Serena, too, gains sympathy as she fights to uphold her newfound good-girl persona and not slip back into bad habits, particularly due to her heart-warming attachment to Dan Humphrey despite the hugely twisted and complicated history between their parents. I can’t help feeling that this is one of the more defective plotlines, with a badly turned out love affair between Rufus Humphrey and Lily Van der Woodsen (respective parents of Dan and Serena) causing a huge and unnecessary rift in the teens’ relationship. Gross. I can’t help but wish, though, that things would get sorted out, as Serena and Dan are the perfect case of opposites attracting. I want them together in the end!

One thing that seems to be becoming more and more elusive is the actual personality of Gossip Girl. Who is she? The seemingly omniscient voiceover narration by Kristen Bell, with its pitch-perfect smugness, is a huge attraction to the show. Its use of technology make it almost Big Brother, and it makes me all the more curious to know WHO she is. There are rumours it may be Serena’s younger brother. Out of the closet at last, gay Eric is a lovable kid, and it’s hard to believe he would willingly spread rumours about his sister. The only other common suggestion is one of Blair’s bitchy team of cronies, but I am keeping my fingers crossed for a big surprise when the cat is finally let out of the bag.

This is a celebration of the other half’s way of life that leaves us free to enjoy the scandals of contemporary moneyed culture and kids today in a way that’s accessible and totally addictive.

So tune in to ITV2 on Wednesdays at 9pm for your weekly dose of teenage drama. You know you’ll love it… 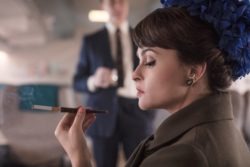