For the last few months – until my friend ordered the entire first series in from Australia, that is – I have been fervently checking BBC iPlayer’s weekly updates. For Stephen’s Fry’s America series? For the latest Have I got News For You installment? No, I was doing it for Summer Heights High, the most gloriously funny mockumentary I have seen in a long time.

An import from Australia, Summer Heights High is a documentary focusing on a term in the life of a suburban Melbourne high school. Fantastically framed – at first I thought it was a documentary – the comedy quickly unfolds. Set on the outskirts of an education system in which 40% of the population attend private schools of some description, the locale is deprived but it’s full of character.

Written, produced and acted by the stratospherically talented one-man-band Chris Lilley, the series follows the respective terms of a trio of characters. The Tongan pupil Jonah Takuluah, ever conscious of his racial identity and with a vocabulary of three words (fuck, rimmer and homo) is Lilley’s crowning achievement of the series. Jonah is the archetypal problem student, and Lilley has honed this stereotype to perfection. A break-dancer and bully to the other students, Jonah is thrown this way and that, but the viewer takes a surprising liking to him.

Drafted in from a local private school – and with an attitude to match – is Ja’mie King. Public (state) school kids, Ja’mie informs her peers in a presentation on her first day, are likely to become rapists and murderers, while their private school counterparts will be far better citizens. Immediately befriending the ‘cool’ girls (who she later decries as ‘public school slags’), Ja’mie initiates a school ‘formal’ dance and, in an effort to stay de rigeur, dates a boy five years her senior. Furiously bitchy, Ja’mie trailblazes, disrupting the school’s social system and ranting about the ‘housing-commission whores’ [her fellow female students] to her private school chums.

Lilley’s third and final stereotype is the violently camp drama teacher Greg ‘Mr G’ Gregson. Forever accompanied by his groomed pooch Celine (whose death he fabricates part way through the series to further his own ends), Mr G is hilariously egocentric. Rude and demeaning to pupils and colleagues alike, he is in charge of the school’s fire drills. He often sets mock-drills, running around the school and screaming ‘there’s a murder in the grounds’ to test the school’s readiness for emergency.

Even the peripheral characters – sadly not also played by Lilley – are crafted to perfection. Doug Peterson, the school’s welfare officer, will be familiar to many. Fresh from the latest conference on ‘challenged students,’ Peterson attempts myriad ‘new thinking’ schemes to improve Jonah’s behaviour. Unsurprisingly they all end in humiliating failure. Miss Wheatley, a young and irascible English teacher, also feels the full force of Jonah’s disruptive behaviour. ’Have you just farted, miss?’ Jonah asks provocatively; or, another of his favourites, ’Aww, miss, you’re so stress, have you got your period or summit?’

Unsurprisingly, this is not Lilley’s first outing. Established as an actor and with a background as a stand-up comedian, Lilley has been there and got the t-shirt. Summer Heights High is perhaps the icing on the cake of an already successful career. Importantly, having been picked up by the BBC, Summer Heights High has taken the British market, and will surely conquer American TV soon. Many of the characters who appear here had their genesis in earlier comedies. Mr G., for example, surfaced in Big Bite, Lilley’s 2003 comedy for the Australian Seven Network, and Lilley’s earlier comedy We Can be Heroes won the prestigious Australian Logie Award for ‘Best New Talent.’

At times, however, Lilley does push the hyperbolic comedy to the extreme. When his Head of Department returns to her New Zealand family home to attend the funeral of her mother, Mr G. wastes no time in installing himself into the newly created position of ‘Director of Performing Arts.’ Muscling his way into the position, Mr G. uses other senior staff as photo-copiers, calls the principal a ‘bitch’ and walks out in a fit of histrionics after his insensitive student production based on the rape and murder of a pupil under a year before. Some viewers might not find such antics ridiculous, but the show had me in stitches throughout. It is, I suppose, this pushing of the boundaries, this parodic hyperbole, which gives the show its allure.

The final episode of the current series had a room full of usually solid guys showing an abnormal emotional investment in the trials of the various protagonists. Jonah, cut off from his friends and despondent, seems to be crushed; Jam’ie is returning to her beloved Hillfield, and Mr G. after a period of suspension, does go to the ball – directing and performing in the school production (which has now morphed into a biopic on his life.)

Refreshingly and perhaps predictably, Jonah gets the last laugh in an ending which will have you doubled over. Seriously, though, check this one out: it’s a cliché, but I laughed so hard and frequently that at one stage I thought I’d broken a rib. Summer Heights High is viscerally, powerfully funny. It’s hard to envision the show being better – perhaps having the trio meet – but this, alas, is a physical impossibility. Watch it! 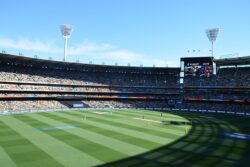