Families, drama, secrets and lies. What more could you want from a television show? Brothers and Sisters is one of my favourite drama series out at the moment. The show started in 2006 and is now on its third series. I only found out about it recently when it came out on DVD, and have since become totally hooked. If you liked Desperate Housewives, Ugly Betty, Lipstick Jungle or Sex and the City, you will love this.

It’s an American drama series featuring the Walker family. They are a fairly well to do family who live in California, near Los Angeles. We are introduced to the family at a birthday party for Kitty the youngest daughter. Then patriarch William Walker dies in spectacular fashion and things are never quite the same again. What looks liked a charmed life from the outside soon begins to crack and the secrets come pouring out.

William’s wife Nora has led what appears to be the perfect life, but after his death she finds out that William had an affair that lasted almost the length of their marriage and has a daughter with another woman. Sally Field plays Nora, and in my opinion does it extremely well. She won the Emmy in 2007 for Outstanding Lead Actress in a drama series, and you can see why. She is a caring, loving mother who, at the same time, meddles in her children’s lives all the time. You actually believe she really cares about the kids and is very convincing as the typical Jewish mother.

The rest of the cast feature some good seasoned actors. Calista Flockhart, Rachel Griffiths, Matthew Rhys, Balthazar Getty (of Sienna Miller fame) and Dave Annabel play the five children. Rachel Griffiths is worthy of a special mention. She’s always undergoing some emotional crisis, but every time she cries on screen, I can genuinely feel her pain. Each character is slightly predictable and fits the stereotype of what TV shows need to portray, but nevertheless each one is genuinely interesting. One of the brothers is gay, and another has an affair; one of the sisters is a lonely housewife and then a single mum, etc, etc. Like I said, predictable but good strong characters that are developed well and whose predicaments I have found myself genuinely caring for.

The Walker family home is the epicentre of all the action with numerous parties, get-togethers and coincidental meetings. In almost every show the house acts as a sanctuary for all the kids who come back with all their troubles and look for help from the family. They are all there for each other and even though they bicker and fall out they have such a deep love for each other that it is wonderful to see.

The show does cover some serious topics like the Iraq war (with one of the sons serving there), but also documents fraud, divorce, illness and fidelity. But I feel it is done in quite a light hearted way most of the time. It is very funny in places too. Usually when one of them has some gossip they are straight on the phone to another sibling who then puts that person on hold as they have an incoming call from another sibling!

The family business, Ojai foods, features in the show quite a lot as well. Ojai is actually a place in California, up the coast, fairly near Santa Barbara and is beautiful. Lives become entwined when Holly (the woman William had an affair with) ends up working for Ojai with Tommy, one of the sons, and Holly’s daughter becomes a close friend of the entire family!

Watching this family drama unfold has been highly amusing, and completely gripping; a perfect way to spend a cold winter’s evening, and I really hope the rest of the seasons are as great as the first. 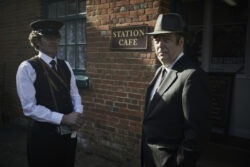 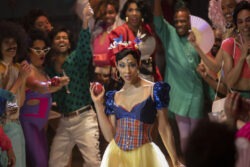