The latest offering from Electronic Arts for the Wii is set to be a worthy contender to the massively popular Wii Sports, boasting 12 different games to whet your appetite and a host of celebrities to play as and battle against. The first game to allow you to live out your dreams of playing beach volleyball with Fergie and watching Avril Lavigne’s backside as she slides down the curling sheet.

A quick glance at the back of the case for Celebrity Sports Showdown reveals promise of “12 action-packed sports and hours of fun.” I don’t know if I’m alone in thinking this but curling, badminton and archery have never struck me as being particularly action packed (unless an arrow goes astray). This game is obviously not intended for hardcore gamers who are used to seeing the entrails and various appendages of space creatures splattered across their screen but instead for the usual Wii-loving crowd of stay at home drunks and, the closely related, girl gamers. Celebrity Sports Showdown follows the usual formula for a successful Wii party game of frantic arm waving and short but fun games which spur on competition between players.

From the minute the game begins your ears are treated to the delightful sounds of generic rock music which compliment the surprisingly well polished and easy to navigate menu system. Obviously not a key element of the game but important nevertheless, I am always pleasantly surprised when I can tell a large amount of work has gone into every last button and option box. It fills me with hope as I slide between menu screens before I begin even playing the game.

Obviously by this point I should mention that, from previous experiences with the mini-game genre, I am not expecting an incredible gaming experience nor to have the slightest bit of fun. The first game I encounter as I systematically go through all 12 is beach volleyball. After a small tutorial popup dialogue box I am thrown into the fray, playing 2 characters facing a team of two CPU opponents. I flicked the Wiimote up and then down, and the game begins with my epic serve. 1 minute and 46 seconds later I find myself face down on the couch wondering how I just got beaten 7-0. The problem was, is that I expected Celebrity Sports Showdown to be the same, forgiving affair that was Wii Sports. I should have instead, waited for the precise moment at which striking the ball was going to give optimum return power, chosing exactly which returning move I would like to use. Sure, I could play this game in the standard manner of waving my arms around like a pillock in front of my friends, but it is much more rewarding if you actually spend the time to learn how to play this game properly.

Next on the list of events was inner tubing. I get the impression this sport is probably more widely known in America as I had only ever briefly encountered this on TV and taking place on snow at that. The premise of this was much simpler than volleyball. Tilt the Wiimote to steer and flick it up to jump. After playing for a few minutes I was bored and frustrated by the slow response of steering and disheartened by not winning a single race. This was definitely a disappointment in the lineup which is a shame after the previous game.

Wild water canoeing had me furiously beating the imaginary bishop mid-air whilst tapping buttons simultaneously. The up and down motion of the Wiimote obviously providing me with the momentum to complete the course whilst pressing the button switched the side I was rowing on. Steering was achieved using the tilting of the Wiimote. Another dull and frustrating affair.

I could go on and list every sport featured but, quite frankly, they aren’t all worth mentioning. A special mention should go to the cliff hangers game which I found quite enjoyable, if rather easy. It made me remember the days of playing an action man game for the PC (oh yeah, thats right) in which you had to scale a wall and watch out for obstacles. Also worthy of praise is curling, a fantastic alternative to bowling in Wii Sports. Curling requires a huge amount of skill and I feel it also replicates the motions of real curling remarkably well. It was the only game which I actually got a huge amount of satisfaction out of learning to play properly. Sure, the addition of exploding stones and “special moves” detracts from what is essentially a well thought out and promising mini-game but looking past that you begin to see a fantastic opportunity for fun.

Something that upset me massively was the inclusion of the joust duel sport. Where two people beat each other into submission using enormous padded poles something we all remember and love from Gladiators. Why on earth would I enjoy beating people with padded sticks in a virtual environment when I could easily obtain a long cardboard tube and some bubble wrap or better still join LARPS… on second thoughts, good job EA.

This game obviously becomes exponentially better with every extra person you play with in the room. It also starts to be more appealing when your blood to alcohol ratio is at about the same level as when you start confessing your love for “chubbies” to your mates. I grabbed 3 friends and a few six packs of beer to sit down for some friendly banter (which soon turned into a testosterone fueled arena of pain). This game never really confesses to be a fantastic single player experience, as with the large majority of Wii games. It provides plenty of entertainment for you and your mates to have a laugh at each other whilst you prance around in the living room trying to paddle furiously down a stream or try and get a pixelated horse to run faster.

Now I feel I must turn my attention to the celebrity aspect of Celebrity Sports Showdown, something they obviously thought was important enough to include in the title of the game. Its a gimmick. Basically. When I started playing the game I was given the choice of 10 celebrities or some generic characters. I chose the generic characters; partly because I wanted to seem so cool that I was above being a celebrity, and partly because I hadn’t heard of any of them. Obviously I’m not at all familiar with sports and so it was odd for me to find that most of my friends instantly recognised the names but how many gamers seriously follow sports? Of the names I recognised (Avril Lavigne, Fergie, LeAnn Rimes and Nelly Furtardo) I can honestly say only Avril Lavigne bore slight resemblance to the actual performer.

I wish I could say the inclusion of celebrities was fun and that I seriously wanted to play certain people off against each other but I didn’t at all. Maybe when they bring out Celebrity Sports Showdown 2 they can let me finally realise the dreams of mud wrestling between Paris Hilton and Nicole Richie or perform rhythm gymnastics as Edward Scissorhands but my bet is that I’ll be let down yet again.

The graphics are a pleasant display of bright colours and well executed character modelling. They may not look like who they are supposed to but the characters are nicely proportioned and an effective caricature look is maintained throughout the game. Poor crowd animations and poor particle effects are pushed aside by the punchy colours and action surrounding the main characters in the game. There is excellent use of using what little power the Wii has to render what is important and giving the rest of the scene a back seat.

Aurally, the game doesn’t have a score to rival the Zelda series (or Final Fantasy for you Playstation fanboys) but it is well executed and unobtrusive. You won’t be listening to it much anyway as onlookers jeer and chant about how their grandmothers could beat your sorry ass at rapid fire archery.

All in Celebrity Sports Showdown is worth a look if you are into party gaming on the Wii or just fancy seeing friends slowly develop RSI through what can only be described as masturbatory actions, then rush out and buy this game, it won’t disappoint. 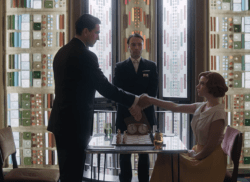 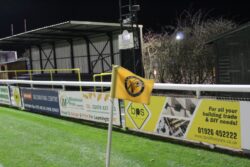