Rich Boden, a Ph.D research student in the Warwick Biological Sciences department, has been named the Young Microbiologist of the Year (YMB) for his work on dimethylsulfide, a chemical produced by certain types of plankton when they die.

The award, alongside a £500 prize, is presented annually by the Society for General Microbiology (SGM). It is exclusively for Ph.D students or post-doctoral researchers that have completed their Ph.Ds within the past two years, and includes a year’s free membership of the SGM.

Boden said he was surprised to receive the award, and ‘didn’t quite believe it’ at first.

“I had to leave the conference in Dublin where the finals took place before the winner was announced”, he said, “so I heard it second-hand the next day. I didn’t quite believe it until I had the cheque in my hand a few days later. ”

Two years ago, a post-doctoral researcher working in the same department, Dr Josh Neufeld, was named as the YMB. Commenting on the outstanding success of the department, Boden said that there was a ‘natural air of busyness and real enthusiasm’, and that the staff were ‘inspiring’.

BREAKING: 92% of Warwick research found to be world class 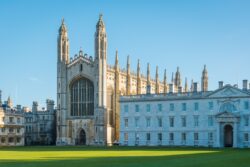