The last time De Niro and Pacino co-starred in a film was in Michael Mann’s excellent Heat, a film which, although not entirely free from macho posturing, deftly poised the massive cinematic personalities of its stars. The only things balanced or well-considered in Righteous Kill are the chiasmic slogans that are periodically growled by Turk (De Niro) and Rooster (Pacino), two New York Homicide Cops who’ve seen it all a hundred times over, and even these axioms are so haughtily delivered they seem like Turk and Rooster have been itching to unleash them for years. When someone starts murdering local criminals who have escaped justice, the pair battle two rival cops to find the killer (and “give him a medal,” as Pacino grimly quips). After three minutes of pass-the-parcel banter the all four cops decide the killer must be a member of the force. Aside from being a carbon-copy of the plot of the second Dirty Harry picture Magnum Force (in which a group of San Francisco cops whack the city’s deserving felons) the film’s handling of the ideas raised by this premise is about as delicate as Harry Callahan’s use of his .44 Magnum. Themes of justice, morality, vigilantism and ‘Righteousness’ are brushed aside by the tactless inclusion of superfluous filler like De Niro’s bizarre sado-masochistic relationship with an attractive detective at least 25 years younger than him. While she begs him for more pain, he looks like he might keel over with the excitement. So why does the film do such a poor job of dealing with such integral themes?

It may seem harsh, but most of the blame must be shouldered by Jon Avnet; De Niro and Pacino are simply playing themselves (albeit themselves 20 years ago). It is Avnet’s handling of these two powerhouses that does the most damage. It’s as though in the cast meetings he told the pair: “Just do that thing you do!” and let the cameras roll. Avnet seems to think that if you put two great actors together you automatically have a great picture. In Righteous Kill the result is at best distracting and at worst clichéd. While a wild-eyed Pacino gnashes gum, grinning and rubbing his hands, De Niro squints, grimaces and bobs his head back and forth. I had hoped that the co-stars’ combined age of 130 wouldn’t be too obvious, but, rather depressingly, it was. Pacino’s pickled-walnut visage is vaguely distressing, but he seems as fit as Usain Bolt in comparison to De Niro, specifically in the scene where Turk struggles to his feet from the kitchen floor after a heavy S&M session with his unfeasibly attractive twenty-something girlfriend. Elsewhere, the supporting cast are uninspiring. Brian Dennehy is the fatigued police chief who intermittently tells Turk and Rooster to ‘Knock it off!’ John Leguizamo and Donnie Wahlberg are passable as the younger rivals. Carla Gugino does a great job of appearing to find De Niro irresistible but is less adept at playing a deviant female caught up in this man’s man’s world. It doesn’t say much for Curtis ‘50 Cent’ Jackson’s acting talent that he manages to appear the weaker man when he squares up to the retirement-aged Turk.

Avnet attempts to match the highly-charged braggadocio of his stars with frenetic camerawork that makes the whole film seem like a trailer; the camera rushes from face to grimacing face, shifting in and out of focus and zooming in on guns being cocked and triggers being pulled. Attempts at subtlety are anything but; a scene of chess pieces falling is cut with machine gun shells chiming in slow motion on steel floors. And why does Pacino turn up to watch De Niro coach little league in a leather jacket and on a Harley Davidson with two women on the back? It is oddities like this, coupled with a preference for unnecessary details rather than plot or character-development, that make central themes seem incidental. The near impossibility of any kind of suture between character and audience dulls the few attempts that the film makes at actual psychological or moral comment. The idea of Turk and Rooster as two sides of the law or of society’s conscience is an intriguing one, but one that is trampled by the use of incongruous techniques like fast tracks to blaring speakers or rappers reaching for handguns.

Are there any positives? Just as I was beginning to lose interest entirely the snarling and the grim smirking gave way to some promising moments of interaction between De Niro and Pacino as the plot trundled towards some kind of climax. The ending is satisfactory, but by no means unexpected or even particularly original. The penultimate scene bears more than a passing resemblance to the final scene of Heat. Unfortunately the rest of the film does not. Righteous Kill is brutally rapid, a film where plot and theme are smothered by frenzied technique and, perhaps most of all, personality. Avnet scrambles for the reins but his ageing Italian stallions are too much for him, snorting and careening through extremely well-trodden terrain. 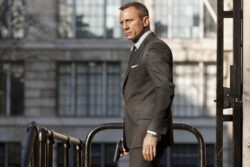