Lessons on the Shanghai way

Just forty minutes in to an hour and a half morning class and my students fall silent. Jerry, a 38 year old engineer, takes out his phone and begins to scroll through old messages whilst Yuli, a 12 year old Japanese high school girl looks nervously between me and Jerry, darting her eyes to-and-fro before she lowers them, giggles softly and shuffles her feet.

I had been through one chapter of the text book with them, ‘39: Behaviour at a restaurant’, which I fleshed out with a couple of fictitious anecdotes about embarrassing dinner dates which neither Yuli or Jerry found funny, but I was now stuck for ideas.

Aside from having lived in Shanghai all their lives, Jerry and Yuli had virtually nothing in common, and Jerry’s arrogance coupled with Yuli’s pubescent shyness meant we sat there in silence – sweating – whilst we each thumbed hurriedly through the text book in the hope that chapter 40 was a guide to teaching a successful English Language class.

Five minutes passed with me quietly cursing the language school and its imbalanced classes and desperately thinking of what to teach next. Jerry looked at me, smiled and chirped, ‘silence is good’. I chirp back, ‘It’s the first time I’ve had peace since I arrived in China. Shanghai is too loud; there is nowhere you can go to escape it because everywhere there is the sound of traffic or construction’. Jerry glared at me as if I had just come into his house and kicked his children. ‘You do not know the city,’ he replied. Yuli giggled softly and shuffled her feet, but Jerry’s attention I had.

I had spent two days in Shanghai and this was my first day teaching at a small language school in Pudong, the city’s modern and predominantly residential sector. I was to teach for a further four weeks, mostly one-on-one or one-on-two classes with students ranging from 10 year old children to 50 year old business men.

My students were all residents of Shanghai who were attending during their summer holidays or after work to improve their conversational English. Jerry, without knowing it, would become my tour guide. During our later encounters he went on to list many of the man-made parks that populated the city, havens from the constant noise.

He would also boast about newly developed apartment complexes, office towers or underground Metro lines, arguing that further Western influence on design and engineering is what the city needed. It was what China needed and could only lead to a better standard of living for everybody in the country.

Not everybody agreed: ‘Shanghai needs to slow down’ complained another of my students – Cathy – when describing the city’s ‘old town’. The old town is located in Puxi, over the river from Pudong, a few miles south of the main shopping district.

It’s a hectic market set within and around the walls of old fashioned Chinese shikumen houses where tourists haggle for cheap jewellery, clothes, Chinese goods and counterfeit electronics. It’s easy to be sucked into the excitement of bargaining or succumb to the artificial charm of the surroundings but Cathy’s complaint was that the rapid redevelopment had extinguished any real history of the city.

The old town that remains holds no historical worth, she tells me, and it is just an attractive part of the old city that has been artificially restored to appeal to tourists. ‘What’s the point in visiting these old buildings,’ she asks, ‘if you do not know a history for them? Shanghai needs to slow down or we’ll all forget that we are in China’.

Shanghai has become over the past two decades a focal point of China’s involvement with the west. Its geographical location on the Eastern coast makes it the most susceptible to American contact, and the recently constructed Pudong international airport runs many international services to Europe, Asia, America and more recently the Middle East.

Utilising its accessibility to the West is no new thing; Shanghai prospered in the mid 19th century when it began trade via the Yangtze River. During the early 20th century the city became a popular spot for tourists and immigrants who came to live and work in the city and their mark is still left by the amalgam of architectural styles that dot Shanghai. When the Communist Party of China seized control of Shanghai in 1949 the city closed itself off from the world and it became an industrial centre of the country. Shanghai now boasts the popular slogan of ‘opening its doors to the west’ once more and thus a surge of new development and business contacts has begun. Now the population is split between those clinging on to the little remaining history the city possesses and those desperate for a piece of this expanding metropolis.

To get a better understanding of the city I would always ask my students how they found living in Shanghai, and this produced some of the liveliest discussions. Everybody found it convenient; some exciting whilst others too busy. Some people had never left the city, many had little desire to and those that had claimed the job opportunities and attractive housing made it too convenient to want to live elsewhere. ‘Convenient’ was a word that came up a lot. My street map became an invaluable prop in my classes. For every new class I would spread it out across the table and ask my students to tell me about the city, point out where they lived, where they went to school and where they worked. I told them to recommend restaurants and bars and to tell me about the architecture of the city, the parks, the sights.

The class quickly became a contest for the most topographical, and each student boasted about which area was cleaner, friendlier or home to the best dumplings. ‘This restaurant’ remarks Leo, my youngest and most defiant student, ‘is very money. Very money!’ Leo was pointing at the Bund, a landmark riverside terrace of beautiful neo-classical structures and a testament to the earlier Western dominance of the city. The Bund is home to Shanghai’s most expensive bars, clubs and restaurants, some offering fantastic views of the Pudong skyline. ‘West Nanjing road is great for shopping’ remarks another student, tracing her finger across the 4 mile long road and listing some of the fashionable brands that have outlets there. ‘But the prices are too high’ she complains. ‘I live here in Pudong!’ shouts another who points to a housing complex half a mile south of the language centre in Lujiazui. ‘It’s very convenient!’

‘This map is old’, one of my older students remarks. According to the copyright the map is only a year old but my student is quick to point out housing areas that no longer exist in place of shopping malls or hypermarkets. Most of my students can tell me stories of people they know who have been relocated because of government redevelopment. Often reasonable compensation is offered but that means little to those who are forced to leave houses their family have lived in for years. ‘You are missing Shanghai’s landmark buildings’ he proclaims, grinning wildly. One absentee is the newly constructed Japanese World Finance Centre which was completed a week before I returned home. This huge curved tower is the tallest building in the city and the third tallest in the world. From a distance it looks like a bottle opener as the top floors have a trapezium cut away. After visiting the Shanghai Urban Planning Museum I later discover that the original design was for a circular cut away, but China protested as the design was too much like the Japanese flag. China may be eager to welcome foreign investment but some xenophobic prejudices prevail. The site for the 2010 Expo is another omission. This key hub will, when completed, house hundreds of visiting international companies where China will pick and choose those they decide to do business with. For many students, even the very young, this is an exciting event in Shanghai’s calendar. A couple of young high school students even tell me that they are more excited about the Expo in two years’ time than they are the Olympic Games.

Shanghai’s rush towards Westernisation and redevelopment is too readily eradicating its history. Originally having prospered from the Opium trade, Shanghai has never fully shaken off it’s nickname ‘the whore of the orient’ and not without trying. Duncan Hewitt points out in his book on Shanghai’s economic growth, that the city has for the past 100 years been an area of constant redevelopment. But as the opening and closing ceremonies of the Olympic Games demonstrated, China is a country with an illustrious and diverse history from which Shanghai is now far removed. It is a city in which its residents are proud to live and work, proud to be a part of the exciting business prospects, optimistic but a little sceptical as to their own futures. The newly constructed towers which compete for height and span the sky line dominate the city. In a government energy-saving scheme the lights are switched off at 11pm and the skyline becomes a row of jagged shadows that loom over the river and the older parts of Shanghai. As the highways and raised roads weave around apartment complexes and office blocks Shanghai’s oppressive modernisation becomes truly evident. No matter how well my students know the city, its alarming growth rate leaves them unsure. ‘Perhaps when you come back to Shanghai this school will be twice as big!’ suggests one student excitedly. Perhaps, or perhaps it will be relocated several miles east to make room for the third tower the city is about to build in the north Pudong area. For Shanghai’s growth there is no limit, ever expanding upwards with the flexibility to spread outwards atop of what already exists. After four weeks I felt like I knew the city. If I returned in a years time I’m sure that would no longer be true. 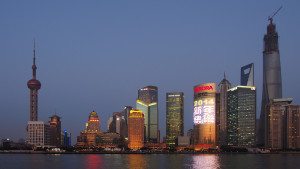 A Student’s Guide to air travel

The perks of living in a tourist destination