The peace circus must turn outwards

It is a brave person or an ignorant person who voices optimism about the Israeli-Palestinian conflict. When considered historically, your safest bet is to say that any peace negotiations will end in one or more of the concerned parties renewing violence as a reaction to what it sees as unacceptable terms. The Arab-Israeli tinderbox is never more than a spark away from conflict; rarely are there few potential sparks.

The upcoming Annapolis summit in the US is no different. There are many matches waiting to be struck. Concerns surrounding the presidential candidacy in the Lebanon could erupt into violence if neither of the feuding parties can agree on a compromise. Should Syria not get its preferred candidate then any future talks on the disputed Golan Heights area with Israel could be pushed even further back on the agenda amidst growing animosity, and –potentially- further violence by Hizbullah. Nothing then conducive to fostering Syrian, or indeed Israeli public, support of the latest peace attempts.

Equally, the exclusion of Hamas from the summit has crucial ramifications. The Abbas administration can hardly be said to be representative of Gaza since Fatah’s expulsion from the Strip in June. The effective silencing through exclusion of Hamas leaves them fewer conduits through which to express their point of view. Violence remains a steady recourse.

Surely playing on the mind of Ehud Olmert is that when last proposed in 1995, the suggestion of giving up land and settlements in the West Bank led to the assassination of the Prime Minister, Yitzhak Rabin. Such a heightened awareness of the stakes has its consequences: No one wants to build up these talks only to have them knocked down as with the abortive Camp David summit in 2000, and the subsequent ‘road map’. The latter was used by both Israelis and Palestinians as a way of scoring political points over the other.

The attitude has to be different on both sides coming into this one. Perhaps it is. One crucial factor is the presence of US backing, largely absent since 2000. The Bush administration’s self conscious desire for a glorious swansong will add a much needed impetus to the proceedings. Equally the Annapolis summit is merely the starting point for a much more substantive set of negotiations that will ensue in 2008, providing the initial summit doesn’t end in tears. One can see it as creating an outline to the agenda, rather than the agenda itself. In this sense it is understandable that the importance of the summit has been downplayed, described by one White House aide merely and perhaps facetiously as a “get together”.

The working relationship between Abbas and Olmert appears to be in good order though. The approval on Wednesday of a shipment of 25 armoured vehicles to the Palestinian security forces in the West Bank is just the latest show of good faith. 440 Palestinian prisoners are also due to be freed in advance of the talks. Fatah remains dedicated to secular nationalism, and the existing peace agreement between Israel and Egypt provides vital stability in the area of Arab-Israeli relations. Its attendance was never in question. Within the state of Israel too the clamour for peace is loud, if not deafening. Even 38 per cent of Hamas supporters are purported to desire peace. All of which allows a glimmer of hope. However it will remain a fool’s hope, and well within the preserve of the brave and ignorant unless a careful tightrope act is undergone.

For all his dashed credibility in this country, Tony Blair’s announcement on Monday –in his new role as envoy for the Quartet of Middle East peace negotiatiors- is central to the success of Annapolis. The steps he announced were modest, such as the provision of sanitation improvements in Beit Lahiya, an industrial zone in Hebron and in Jericho. Nonetheless the accompanying statement that “without hope of prosperity…politics will never succeed” was an important realisation. When the peace circus at Annapolis is taken on the road back to the Middle East it is the daily experience of both Israelis and Palestinians that will make or break the agreements made in the coming weeks. As Lorna Fitzsimons observed in the Guardian on Thursday, “Israelis and Palestinians will still be living the realities of conflict.” The disparity between words and the ‘facts on the ground’ has always been a major source of contention in the peace process. The concrete peace-lines carving up the West Bank and emasculating Palestinian industry are still referred to as ‘fences’, and the non strategic settlement of Israelis outside of the 1967 borders is still construed as being in the interests of security.

The mutual suspicion and fear that the Palestinian and Israeli people live in has to be addressed. Perhaps such small steps towards raising up the Palestinian people to a state of industrial worth and success will help encourage Israelis to view their neighbours as valuable partners. The notion of equality is paramount to an equal, two state solution. Unless this attitudinal change can be brought about at the grass roots, then even if the political tightrope act –of gathering together the nearly 50 countries and organisations, including Syria, Saudi Arabia, and Egypt most notably- is completed successfully, little will change.

Both sides must make significant sacrifices in order to achieve peace, but the alternative is much worse. If we have reached a stage where success is no longer seen as a matter of binary opposition, and both appreciate that peace, through a two state solution is the only acceptable outcome then perhaps this latest ‘get together’ has a chance of success. It is right to be optimistic; it is necessary to be so.

Eurovision song contest should be about unity, not politics 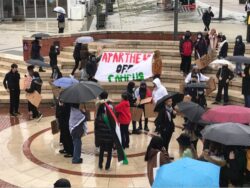