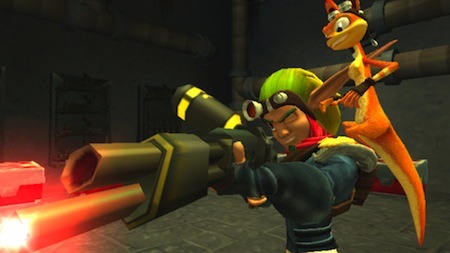 My parents were particularly strict when it came to gaming as a child. I wasn’t allowed that much time on my consoles, especially not during the week – unless as a reward or if I’d had a particularly bad day. So imagine how great it was for me to be given a shiny silver PlayStation 2 for a birthday one year – and the much more desirable extension on gaming time.

Add to that a cousin gifting me a gem of a game: Jak II: Renegade. I don’t have the original case, just the CD, but still, I was excited to discover this new game. Now, I’m not exactly a pro-gamer: my gaming taste is rather limited to the Assassin’s Creed franchise and anything Star Wars – retro or new. Due to my low skill level and a definite lack of patience, I found Jak II too difficult and too time-consuming. Like any child, I gave it a few weeks, and then it was soon forgotten.

Fast-forward to 2020: we’re stuck in lockdown and I’ve dug out the old PS2. My pride and joy (yes, it was hard, but it was still my favourite game), Jak II, was still in the console. Being a lot more level-headed (although some would disagree now), I thought I’d give it another crack.

The other thing about growing up is that you know a lot more swear words. I still found Jak II to be rather challenging to the point where I was taking weeks away from it, mainly to come back with it fresh, but also to stop cursing the developers. Some honourable mentions include “Blow-up Strip Mine Eco Wells”- I’m decent with the JET-Board the game gives you, but get frustrated when it’s asking for many tricks in a row, and any of the Stadium races (because, the game doesn’t care if people can just casually climb over you or push you off the course). And then, getting the Seal of Mar piece from the Water Slum, as somehow if you run over people with the Hoverboard it hurts you.

Due to my low skill level and definite lack of patience, I found Jak II too difficult and too time-consuming

However, the real pain-in-the-backsides that stopped me playing were “Escort Men Through Sewers”, “Attack the Metal-Head Nest”, “Escort Sig in Underport”, and “Beat Errol in Race-Challenge”. I’m going to give a brief breakdown, trying not to go on a Godzilla-esque rampage.

With the first escort mission, you have to take three of Krew’s men through the sewers so they can blow-up a statue of Mar, the founder of Haven City (note – don’t commit vandalism kids). The problem here is that they have no real firepower. They are useless against the Metal-Heads – the primary antagonists, who come in all shapes and sizes – leaving you to deal with the constant waves of enemies attacking these men while they do nothing about it. You then reach a point where you have to take out these Metal-Heads who have, as one of the men put it, “laser-beams of death”. Have fun jumping over those.

With Sig’s escort mission, you have the joy of kicking exploding crates into slots that open the door to the next area – if you don’t get both in on time, you have to start again. Remember, Sig is handling an army of Metal-Heads that chip away at his health, and once you get through the crates, you have to jump and run from the giant Metal-pede. Oh, and like any of these missions, if you die: you start from the beginning.

The issue with Errol’s race is that if you miss a single checkpoint, the race ends – even if you go just a little bit out of the track. If you bump into one Krimzon Guard, the whole city’s police force will chase you. Considering it’s a single-seater zoomer as compared to the double zoomer, the slightest crash or damage slows you down and could also cause your vehicle to explode. Have fun with that, especially with the tight corners.

Finally, “Attack the Metal-Head nest”. It’s a nest: why the hell are you going in there alone?! You have all sorts of beasts attacking you – some you can’t kill, and if you get too close, they’ll shock you. It’s basically a suicide mission – something the game says about a lot of its missions and it takes several tries to complete.

I feel much of what I’ve said has been very negative. Jak II is a very time-consuming and frustrating game, especially for those like me, who see themselves as relative novices. However, it pays off. When you finally complete it, you get a huge sense of achievement. And while you feel that there are endless missions, it means you get to enjoy the story for longer: and what a great story it is.

Set in a dystopian future, Jak II follows a hilarious Ottsel in the form of Daxter, and a group of other characters who are rich in their own sense. These stand alone from the protagonist, with Sig, Krew’s bodyguard and right-hand man with a dark past (although this is only really explored in Jak 3), and Torn, one of the Underground leaders who has a tough exterior yet a soft spot for fellow Krimzon Guard Ashelin, being some of my favourites. I feel I would be more invested if I had played the first game, but it’s not necessary to get this feeling. Every time a mission puts you down, the story picks you up.

Jak II and Jak III are very fond, albeit frustrating games from my childhood that left a mark on me then

I guess that’s also why I want to put in a brief word about Jak 3. It was equally challenging in places, such as when you have the subway car missions, destroying the Metal-pedes in nest, the second gun turret mission, or the final boss (although this last one is expected). However, it was also a lot easier. If you died in a mission, chances are that you didn’t have to start from scratch if you’d reached a certain point. In the mission to “Blow open the tower door”, you can restart once you reach the port – some halfway from HQ.

The story continues to stand-up – Daxter is a comic genius, and I won’t apologise for that – and the game makes a lot of concessions, like including additional gun mods and light eco powers, such as healing, making things a lot easier. If you need additional help, you can always buy gun and vehicle upgrades by collecting Precursor Orbs all over the map. Jak II took me weeks to complete, with lots of breaks. Within a few days, I had done about 60% of Jak 3.

I would love to play the other games in the series, particularly the first Jak and Daxter, and the Lost Frontier (although Jak X Combat Racing and Daxter’s stand-alone game are also very compelling), just to see if the whole series stands up. However, Jak II and Jak III are very fond, albeit frustrating games from my childhood that left a mark on me then, and continue to do so now. And I’m pleased to report that they still hold up for me.