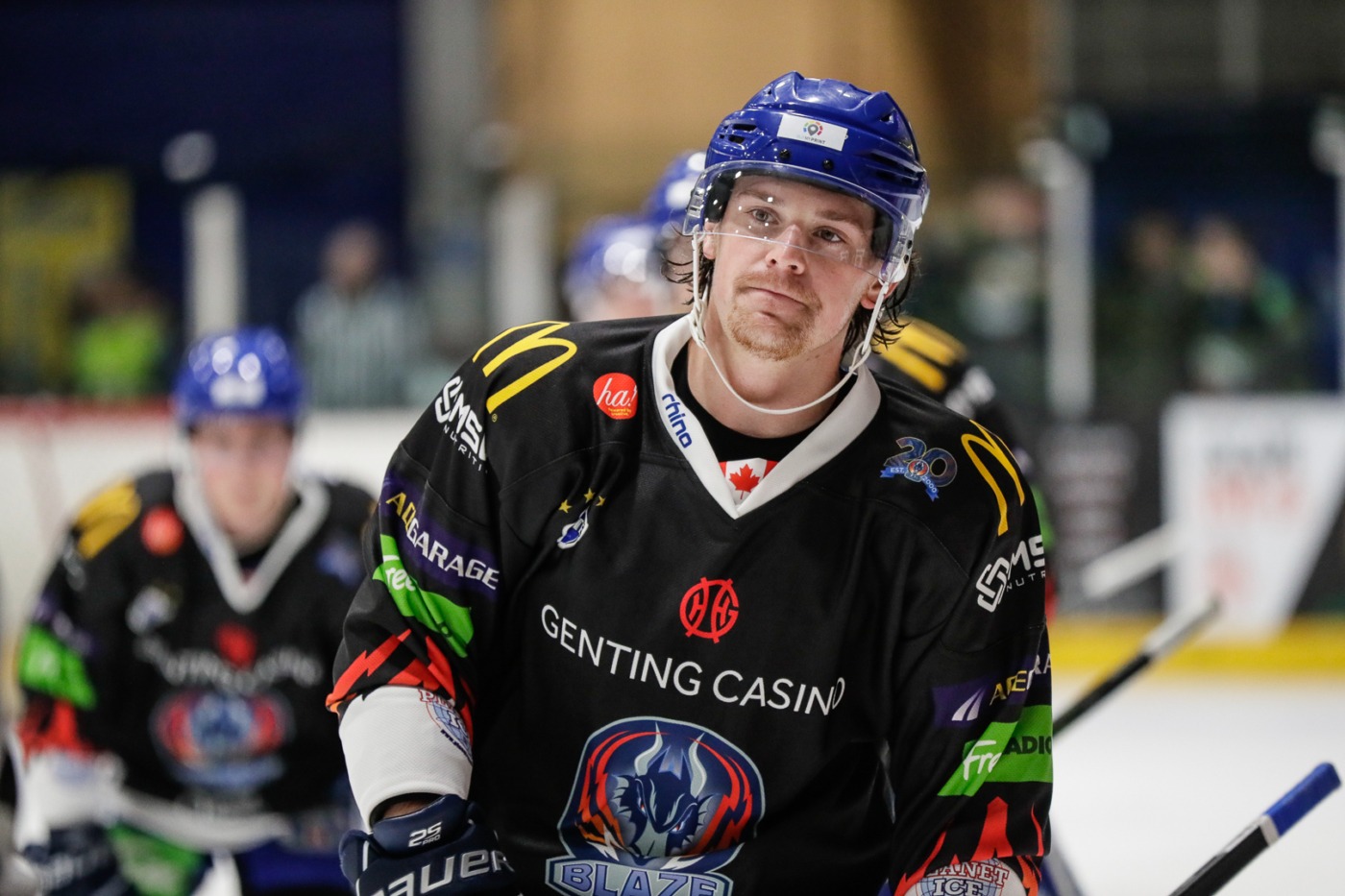 Coventry Blaze have secured the return of Canadian forward duo David Broll and Evan Bloodoff ahead of the 2020-21 Elite Ice Hockey League (EIHL) campaign. Broll and Bloodoff, both integral members of the Blaze roster that finished third in the COVID-19-curtailed 2019-20 season, join British forward Luke Ferrara, and head coach Danny Stewart in agreeing to return to Coventry’s Skydome Arena next season.

Broll, 27, became an immediate fan-favourite at the Skydome Arena upon his arrival from Jacksonville Icemen in 2019, renowned across the Elite League for his presence both on and off the ice. Awarded Clubman of the Year, Broll displayed his leadership credentials as one of the Blaze’s associate captains for the 2020 season.

Broll was previously a regular in the AHL, making over 300 appearances

Head Coach Danny Stewart said: “Broller was a big presence for us on and off the ice. He quickly became one of our leaders last year and it’s great to get back another piece of the leadership group along with Feds. I think we will see an even better David Broll this season.

“We always talk about his presence and character, but before his injury he was close to a 20-goal pace. He skates well for a big guy and has the skill to go with it. I think it was evident to see he 100% bought into the jersey, and it’s great to have him back.”

The ‘Brolldozer’, as the Canadian forward is known on both sides of the Atlantic, contributed 21 points in 43 appearances for the Blaze last season, helping the club to its most successful finish since 2013.  Before arriving in Coventry, Broll was previously a regular in the American Hockey League (AHL), making over 300 regular season appearances for Toronto Marlies, Syracuse Church, St. John’s IceCaps and Laval Rockets.

Bloodoff made an immediate impact upon his arrival in Coventry, registering 22 goals and 13 assists

Broll will be joined in Coventry next season by his 2019-20 team and housemate Evan Bloodoff. A summer signing from EIHL rivals, Fife Flyers, Bloodoff, 29, made an immediate impact upon his arrival in Coventry, registering 22 goals and 13 assists in his debut season with the club. Bloodoff’s league form carried over into the Challenge Cup, in which the Canadian forward registered seven points in nine appearances.

In response to Bloodoff’s return, Stewart commented: “In Bloods we get back another experienced guy who is an important piece of our team. He’s got that eye for the net that isn’t always easy to find, and we know he plays the game hard. He scores hard area goals and has the skill set to go with it. He’s had three seasons of good production in this league and there is no reason to believe he won’t again.”

Throughout his time in the Elite League, Bloodoff has regularly featured among the division’s top producers, scoring 62 goals and notching 35 assists in 110 Elite League competition appearances. In 2017/18 he lifted the Gardiner Conference trophy, leading the Flyers to the postseason in both of his seasons in Fife.

David Broll and Evan Bloodoff’s return to the Skydome Arena is yet another statement of intent from Coventry Blaze, following their third-placed finish last time out. In 35 league appearances, Broll notched 18 points for the Blaze in 2020, but it was the Canadian forward’s physicality and leadership that made him a fan-favourite in the West Midlands. Despite spending 94 minutes in the penalty box, Broll made an impressive start to his European hockey career, becoming a recognisable name across the EIHL. A rare feat for a player in his first season in the United Kingdom.

Bloodoff’s return will be popular among the Blaze fanbase

Evan Bloodoff is well-blooded in the Elite League, having already proven his credentials in two seasons with Fife Flyers. A tricky, skilful forward, Bloodoff’s return will be popular among the Blaze fanbase. With Bloodoff, Broll and Ferrara already confirmed to be coming back to the Skydome Arena next season, Coventry Blaze have made a blistering start to their summer recruitment plans. Bloodoff, like Broll and Ferrara, is a reliable source of goals; HC Stewart will expect him to deliver once again in 2020-21.

Speculation now turns to the next phase of the Blaze’s recruitment strategy. In fact, the rumour mill across the Elite League is once again in overdrive. Predictably, Cardiff Devils netminder Ben Bowns has been linked with a summer move to the continent. Likewise, C.J. Motte’s stint in Coventry did his reputation no harm. As silly season commences, one thing is demonstrably clear: Coventry Blaze have not been deterred by the COVID-19 pandemic from making waves in the market. The Blaze are on an upwards trajectory; perhaps the good times will keep on rolling in Coventry after all.