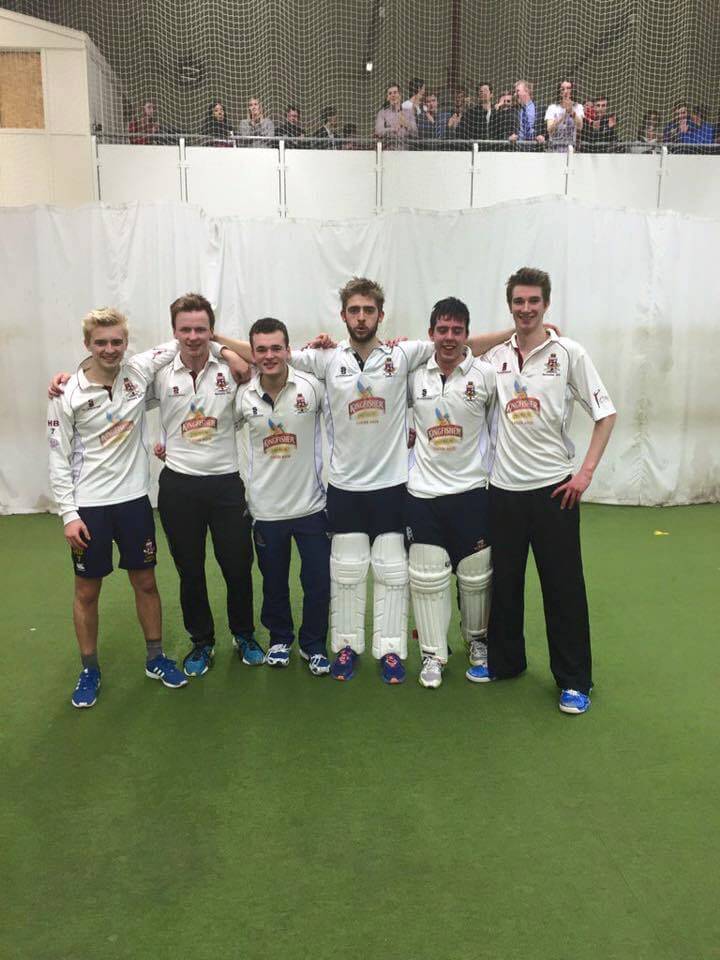 The University of Warwick’s Men’s Cricket Club’s BUCS Indoors campaign began on 7 November 2015; some 19 games and 16 victories later, Dan Goodyear’s men had been crowned national champions in the most unlikely of storylines.

Having beaten last year’s national finalists Sheffield Hallam and local rivals Coventry just three days beforehand, UWMCC kept an unchanged line-up as they embarked for Sheffield for the ‘BUCS Big Wednesday’ on 16 March. UWMCC would be playing against Portsmouth, who we had tied with in an incredible match at the weekend – there was nothing between the teams and this would be evident throughout.

UWMCC would be playing against Portsmouth – there was nothing between the teams and this would be evident throughout.

Unlike normal indoor cricket matches, the final would be a two-innings format to justify Portsmouth’s four-hour trip up to Sheffield. To their credit, Portsmouth brought up an almighty band of supporters who were noticeably loud throughout. Skipper Goodyear lost the toss and Portsmouth elected to bat first. They began well, with both opening batsmen retiring as they quickly adapted to the large Sheffield hall. One of the opening batsmen, rumoured to have not been dismissed all tournament, would torment UWMCC bowlers all day. The strong start continued as the number three batsman also retired; Portsmouth posting 113 off their 10 overs, the only wicket being a late consolation run-out.

In response, it was an absolute clinic in indoor batting from veteran Tim Edmonds, retiring in just the fourth over. Taking inspiration, Goodyear would continue the excellent shot placement and running between the wickets, likewise retiring. The pair were assisted by the innovative Rob Clayden, fresh off his victory earlier in the day with Warwick Squash. Upon returning to the crease, Edmonds continued where he left off, finishing with 39* and UWMCC posting 116-3. 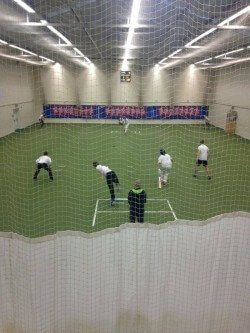 Leading by just 3, the UWMCC brains trust opted for a different tactic in the second Portsmouth innings, bowling a shorter length and leaving the back wall open to attack. It appeared to have worked as the surprise fuller ball from Kit Winder clipped the top of off stump – a real jaffa. The excellent bowling continued in the middle overs, with Clayden and Ryan Chase each picking up two wickets. At 87-4 off 9, Portsmouth appeared to be on their way to a sub-par score. However, the aforementioned gun Portsmouth bat stayed true to his form, hitting four 6s in a row to start the last over. Clayden, fearing for a Yuvraj-Broad repeat kept his nerves, the over ending with a single and then a wicket.  UWMCC would require 110 for victory.

A very good first few overs from Portsmouth, as well as the wicket of the in-form Edmonds, and their fans were doing a Poznan on the balcony. After Henry Bexson was run out amidst confusion, Winder kept his head and batted brilliantly, retiring with the score at 71-2 off 6. Goodyear carried on in the same vein as his first innings, UWMCC needing 21 for victory off the last two overs. Chase was run out, bringing Winder back to the crease who hit 7 off 2 to leave just 2 off 5 for victory. A small brain explosion from Winder left Goodyear last man standing with the scores tied, but there was no repeat of the previous match. Goodyear hit the wall to secure national glory – cue delirium on the balcony and all those watching at home.

In an incredible campaign for the club, credit must also go to Jacob Sargeant for the key role he played throughout the season before exams conspired against him. Special mention must also go to Rob Clayden, who became the first person ever to win two BUCS titles in one day. Here’s hoping UWMCC can carry on their form in the outdoor arena. 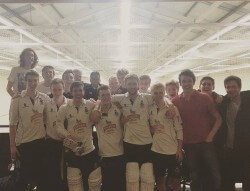