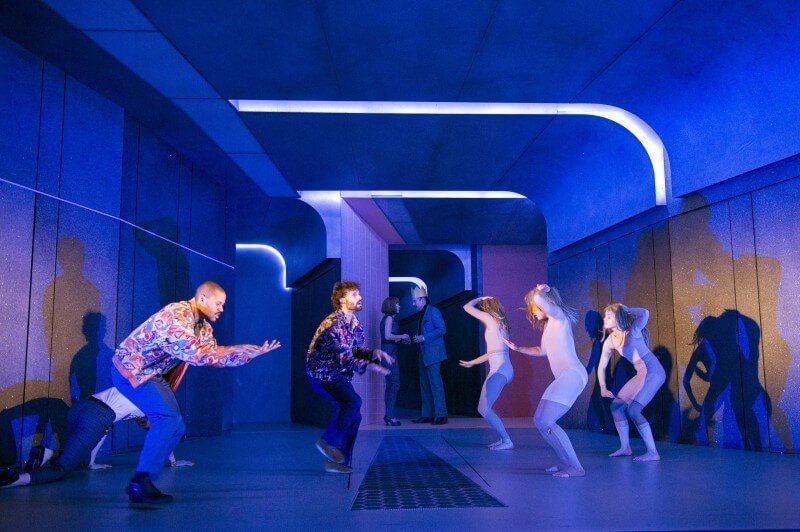 Interview: Carrie Cracknell on her exciting and innovative adaption of Macbeth

Chloe-Ana McConville interviewed Carrie Cracknell about her and Lucy Guerin’s adaptation of one of Shakespeare’s classics. Featuring John Heffernan as Macbeth and Anna Maxwell Martin it is coming to The Birmingham Repertory Theatre on the 26th January.

After already working together and demonstrating your creativity in Medea what made you both want to tackle Macbeth?

We’ve been working together on and off for about four years, developing material, choreographing material. I directed Medea and Lucy was the choreographer on that. Then we decided to develop the relationship further into a co-directing relationship because we were interested in trying to find a crossover between two ways of working and to create a project which had an equal weighting between text and movement. As co-directors we really wanted to try and interrogate each others ways of working and a create a piece of material which had both languages within it.

Why did you choose a Shakespearean classic to experiment with this new joint approach?

I’ve always wanted to direct Macbeth, it’s an extraordinarily challenging piece of material. There’s a really dark heart in terms of both the central anger at the middle of the play and also the supernatural elements and that felt like a really interesting thing to try and express through choreographic material.

How did the rehearsal process play out in terms of combining theatre and dance? Did the two aspects develop hand in hand or were rehearsals divided between them?

We developed the material together but then there were also separate rooms, so the choreographer would go off and work with the dancers and I would work with the actors but we would also spend chunks of each day working together. It was quite a fluid, collaborative process.

When the production premiered at The Young Vic, it was the first Shakespeare production to follow Hill-Gibbin’s radical interpretation of Measure for Measure, what was it like following this and how did audiences respond? Did it influence your preparation in any way?

The Young Vic is really well renowned now for tackling classic plays in this way. There’s a very strong expectation from audiences and critics alike that the directors who come to the Young Vic and work there will all have their own perspective on the play. It would almost be more surprising if there had been a conservative production. All the directors who work there, whether they’re dealing with The Cherry Orchard, Measure for Measure or Macbeth, are all expected to try and come to the material with their own unique perspective and their own sense of an imagined world. There was never another way of thinking about it really.

So moving on to the production itself, from gallery pictures I can see the nobility appear to dress in military jumpsuits, the Kings in suits and the witches in plain, nude, death-like attire. Costume modernization and adaptively is always interesting, what was the aim behind these costume choices?

All of the costuming is an extension of the imagined world which we constructed through the set design as well. This bridges a whole series of ideas one of which is about the production being set very much in a contemporary world, the production speaking to the geo-political situation that is unravelling in front of our eyes across the Middle East and the world at the moment. We also wanted to try to find a more nightmarish cinematic access point for the supernatural element of the play. There were really strong influences for us which included things like David Lynch films and horror films but also looking at very contemporary imagery of rebels across the Middle East. So there was a really broad range of influences coming in. We wanted it to feel completely now and absolutely relatable to our audience. So all of the costume choices in a way were evocations of those influences and ideas.

One of the other striking features seems to be the setting. Shakespeare’s original was set in the open misty landscape of Scotland, a very different setting to the black dark tunnel in your production. How have audiences responded to this?

Macbeth is one of the most widely read Shakespeare plays in schools, colleges and universities across the country. This article of course is for a student newspaper and will be read by students at University, can you offer any advice for young people studying or directing Shakespeare?

I think if students are interested in theatre making then the moment to practice is when you’re a student because you have so many opportunities. It is the crucial moment in your life to try and work out whether you want to be a director, an actor, a set designer etc. Its just the moment to try and experiment and I think the only way that you can find that and find you voice is to follow your own instinct, your own ideas and not just take on other received ideas. The moment when you are a student is the opportunity to be as adventurous, as wilful and as true to yourself as you can possibly be. It’s a whole period of time you can never get back, you can never have that free space, time and resources again. As soon as you graduate and move to becoming a professional theatre maker then suddenly you have to pay for space and you have to pay for actors, you have to pay for everything. So I guess my encouragement would always be try and work out who you are and be as true to that as you can possibly be.