With Wimbledon well on its way, it is as good a time as any to take a look back at how the 2014 tennis season has been shaping up. While it is an overused expression, the first six months this year have truly been unpredictable, with some very surprising wins and equally shocking losses.

January started off with a slew of minor tournaments, each won by a different player. Serena Williams’ victory at the Brisbane International, including wins over Victoria Azarenka and Maria Sharapova, indicated a return to her best form ahead of the Australian Open, while Rafael Nadal started the year off with a win in Qatar. Other pre-Melbourne winners included Na Li (Shenzen), rising talent Garbiñe Muguruza (Hobart) and Stanislas Wawrinka (Chennai).

The year’s first Grand Slam started with a few small upsets in the first two rounds, but the first real shock came in the fourth round, as former finalist Ana Ivanovic took out five-time champion and world number one Serena Williams in three sets. Dominika Cibulkova followed that up the next day by taking out former champion Maria Sharapova – the second time the Russian had lost to her in a Grand Slam. Ivanovic ended up losing in the very next round to Canadian youngster Eugenie Bouchard, while Azarenka succumbed to defeat from Agnieska Radwanksa. However, these results were overshadowed by three-time reigning champion Novak Djokovic’s elimination at the hands of Stanislas Wawrinka, 9-7 in the fifth set. 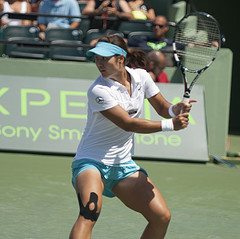 With Andy Murray’s elimination to Roger Federer in the quarter-finals, Na Li was the sole remaining finalist from the previous year, and she made good on it by storming all the way to the final, where she beat first-time Slam finalist Cibulkova in straight sets, 7-6, 6-0. On the men’s side, Wawrinka made it to his first ever final, while Nadal took out Federer in straight sets in the semi-finals. It was expected that the Spaniard would win his second Aussie Open, but Wawrinka had other plans, winning 6-3, 6-2, 3-6, 6-3 and becoming the first player outside of the “Big Four” since 2009 to win a Grand Slam. Lukas Kubot and Robert Lindstedt won the Men’s Doubles, Sara Errani and Roberta Vinci won the Women’s Doubles, and Kristina Mladenovic and Daniel Nestor won the Mixed.

Following the Australian Open, Venus Williams returned to the winner’s circle after a long absence by taking home the trophy in Dubai, where her sister Serena was upset by Alize Cornet. Peng Shaui made history by becoming the first player from China to reach number one in any discipline, when she topped the doubles rankings in February. Her partner, Hsieh Su-wei, joined her atop the rankings a few weeks later.

Nadal won yet another clay-court title at the Rio Open, but lost surprisingly early while trying to defend his BNP Paribas Open title at Indian Wells. Fellow champion Sharapova also lost in the opening rounds. Flavia Pennetta stunned Radwanska to take home the women’s trophy, while Djokovic beat Federer in three sets for the men’s. The Serb also went on to beat Nadal in the final of the Sony Open in Miami, while Serena defended her trophy. Her recent clay-court dominance, however, came to an end the very next week with an opening round loss to Jana Cepalova at the Family Circle Cup. 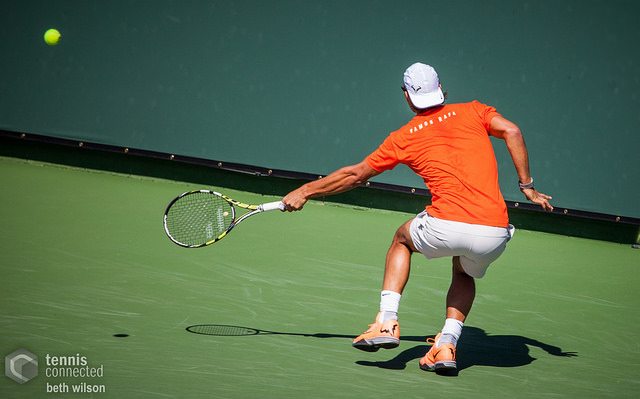 Rafael Nadal struggled both at Indian Wells, pictured, and in Miami. Photo: Flickr/Mirasha

The European clay season saw some unexpected results, the most shocking being Rafael Nadal’s quarter-final losses at both the Monte Carlo Masters and the Barcelona Open. Wawrinka won the former, becoming the first player since Nadal himself in 2005 to win both his first Grand Slam and his first Masters 1000 title in the same year. The Spaniard seemed to struggle – by his standards – on the surface, only winning the Madrid Masters courtesy of the injury retirement of opponent Kei Nishikori (the Barcelona champion), and losing the final of the Rome Masters to Djokovic.

On the WTA Tour, Serena’s hopes of a title were similarly shattered. Although she did pick up the Italian Open, she failed to progress beyond the quarter-finals at every other tournament she played. Former “cow on ice” Sharapova capitalised by winning a third consecutive title at Stuttgart and also winning in Madrid. Her Stuttgart win was the first time that she won the same title three times in her career. Other winners during the red clay season included Grigor Dimitrov (Bucharest), Ernests Gulbis (Nice), Bouchard (Nürnberg) and Carla Suarez Navarro (Oeiras).

At the French Open, the big question seemed to be whether Nadal, on his worst clay-court form to date, would be able to defend his title. That story took a back seat in the first few days, however, as all three of the top women’s seeds lost in the first three rounds, an Open Era record. Top seed Serena suffered her worst-ever Grand Slam loss – in terms of games lost – to Muguruza, going out 6-2, 6-2 in the second round. Li lost in the first round to Kristina Mladenovic while Radwanska lost to Ajla Tomljanovic in the third round. Stanislas Wawrinka also lost in the first round, marking the first time ever that both Australian Open champions failed to win a match at the French. Meanwhile, Federer lost in five sets to Gulbis in the fourth round, his earliest Roland Garros loss since 2003.

Fourth seed Simona Halep lived up to her ranking by making the semi-finals, where she was joined by Andrea Petkovic, Bouchard and Sharapova. The Russian, champion in 2012 and runner-up last year, had to come back from a set down in both her previous matches and she had to do the same against Bouchard, while Halep cruised through to the final without the loss of a set. It was the second straight Slam featuring a debut finalist. In a repeat of Madrid, however, the Romanian was unable to upend her rival, losing 4-6, 7-6, 4-6 – the first three-setter since 2001. Who knew that Sharapova would have won the French Open twice when she first burst onto the scene back in 2004?

On the men’s side, Nadal slaughtered Murray in the semi-finals, only to lose the first set against Djokovic in the final. It looked like the Serbian, who had won four straight matches against Nadal since the 2013 US Open, was going to complete a career Grand Slam. Sadly for him, the reigning champion had other plans and he dug deep to win 3-6, 7-5, 6-2, 6-4, winning a record-breaking ninth French Open title, and fifth straight. Julien Benneteau and Edouard Roger-Vasselin gave the local crowds something to cheer for by winning the Men’s Doubles; Shuai and Su-wei won the Women’s Doubles, and Anna-Lena Grönefeld and Jean-Julien Roger won the Mixed.

The grass-court season has already started, with both Murray and Nadal suffering early losses. The Brit has not yet fully recovered from his back injury, but his failure to defend Queens is still worrying ahead of his Wimbledon defence. Still, with Amelie Mauresmo signed on as his new coach, it should be an exciting fortnight for him. Nadal’s loss, his third straight on the surface, is similarly worrying although it could be chalked down to fatigue after a strenuous French Open final. With the weather promising to be warm and dry, the conditions could favour the Spaniard, though only time will tell who comes out a winner at SW19 in a few weeks.