Online dating is an alien world to me. My one and only experience with said concept is of my friend setting up a Tinder profile in my name when we were bored that was active for approximately one afternoon, and thus it is fair to say that I am far from an expert on the topic. Yet the online dating train continues to overcrowd irrespective of my refusal to jump aboard. Gone are the days when apps were considered the last resort of desperate divorcees, with Tinder alone currently housing more than 57 million active users and registering more than one billion swipes per day.

My opinions on online dating tend to align with those of The Guardian journalist Mirren Gidda, who argues that “It has always struck me as similar to online shopping, except the items are people”, the monotonous swiping based upon what is most likely an exaggerated perception of a stranger’s personality coming across as rather vapid. However, the morality of online dating aside, there is a more important aspect of the process that must be addressed: personal safety. As little as ten years ago, the concept of meeting a stranger you had spoken to only online was met with a generally unanimous response: don’t. Yet, busier work schedules and general bad luck on the dating scene has resulted in this practice becoming a rather normal aspect of modern life.

However, this does not mean that the risk has disappeared. Tinder, one of the most popular dating apps in the UK, has publicly recognised this and, as a result, plans to add a panic button and anti-catfishing software to their app. These new functions, all of which are expected to be made public later this year, also include location tracking and photo verification, making it more difficult for members to hide behind a fake profile. These feature reveals have followed the release of figures showing that the number of recorded sexual offences involving online dating sites have almost doubled in the past four years. Location tracking will make it simpler to inform your friends of your whereabouts which creates a greater element of safety to the experience.

Whilst we anticipate the release of these new features, there are currently a number of ways that you can make sure that you are protected if you decide that dating apps are for you.

Ensuring that you meet your date in a busy, public place such as a café or a restaurant means that there are always bystanders if you feel that you are unsafe or wish to make a swift exit.

Agreeing a text code word with a friend means that you can feign an emergency call if necessary. Letting your flatmates know where you will be and when you will be expected home is key as it prevents any delay in action should they find you unreachable.

If you feel that your personal safety is at risk, many pubs and bars have implemented the Ask for Angela initiative, a discreet distress signal that allows for trained staff to step in and offer help. Posters can be found on the inside of toilet doors and the scheme is not gender specific, an important reminder that sexual assault and intimidation is far from a women’s-only issue. 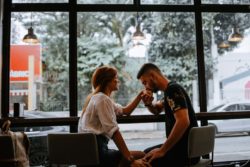 Romance is dead and we’ve killed it