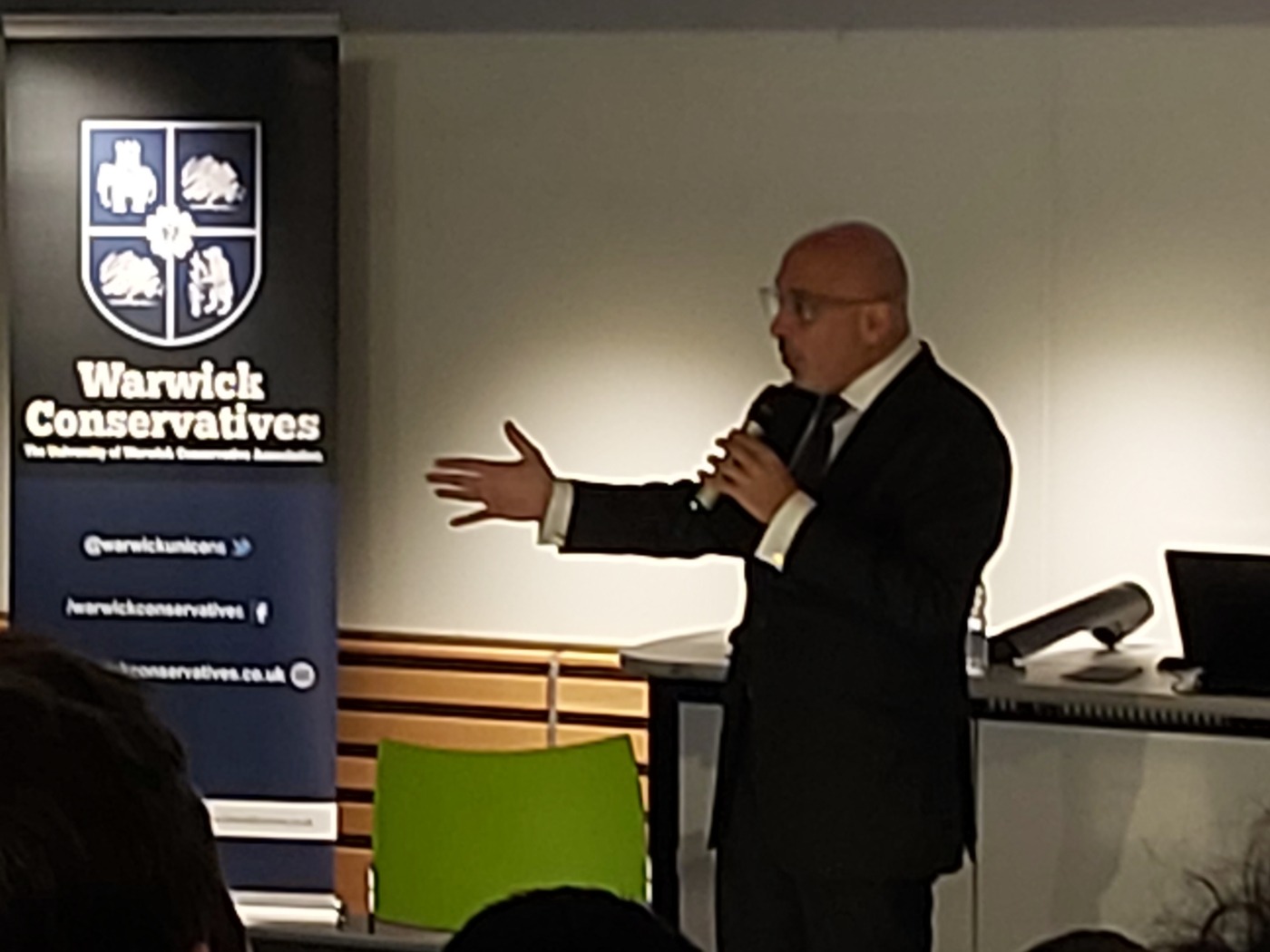 The full story of Education Secretary Nadhim Zahawi’s visit to Warwick, one month on

UWCA announced the speaker event weeks before across various social media platforms. It was open to both members and non-members, but ticketed. In an email to students, a UWCA member advertised the event on 24 May, saying it was “open to all students.” He added: “This is a fantastic opportunity to hear from and directly question the individual responsible for our education.”

Warwick Pride announced that they would protest the event with “trans flags”, and ask Zahawi questions about “the rights of trans people in the UK”.

Warwick Pride, who represent students of LGBT+ background, opposed Zahawi’s defense last year of a former University of Sussex academic, Kathleen Stock, who the society describes as a “notorious transphobe.”

In their statement, Warwick Pride also raised previous comments from Zahawi about trans issues: “Parents have to be front and centre of this. And that is my message to the front line is to say: you have to involve parents in this. You have a duty to safeguard those children and parents are very much part of that.”

The society claims the “detrimental impact of outing LGBT+ youth to their parents”, is “trivialised” by Zahawi.

Warwick Pride added that in the past, the Education Secretary has used “the common transphobic dog-whistle ‘adult human female’.”

They believed the event contravenes Students’ Union (SU) rules on Equality and Diversity, but understood the difficulty of cancelling a visit by a sitting Cabinet minister.

The Boar later reported, after seeing leaked emails, that Warwick Pride appeared to attempt to cancel the event by complaining to the SU, and later tried to have the event recorded and see risk assessments developed by the SU about the event. All these requests were denied.

In messages between Warwick Pride and The Boar News before the speaker event, Warwick Pride claimed that: “One of our execs complained on the SU website to try to stop the event from happening because of its association with Nahawi.” The Boar News has not seen this complaint, but has seen subsequent emails exchanged between the individual that made the complaint and the SU.

These emails included requests for SU “documents concerning risk assessments” relating to the external speaker, as well as pleas to have the event recorded “as a potential mitigation to reassure Warwick students that SU by-laws concerning Equality and Diversity… are not broken”. These requests were rejected by Warwick SU.

When asked for comment about the complaint following the speaker event, Warwick Pride told The Boar: “Warwick Pride’s aim while complaining to the SU was to receive the maximum possible mitigation.”

Between the statement and the event, a new group, Trans Action Warwick, emerged and released social media promotion of a planned protest they wished to stage at the Zahawi event. They called it a: “Demonstration to Resist Zahawi”.

Aware of the planned protests, UWCA sent an email to all who had tickets two hours before the event, stating that there would be an “area set up outside of the room” for protesting.

At the event on 27 May, Pro LGBT+ rights activists, led by Trans Action Warwick, blasted music and chanted loudly outside. It could be heard very audibly inside the room.

Some LBGT+ protesters did have tickets to the event but were denied entry, several cited the reason as “transphobia”. Another attendee said they were “blacklisted”. Members of the UWCA who ran the event confirmed afterwards that they had stopped some individuals from attending to keep proceedings orderly, and to ensure that the event could go ahead safely, protecting exec members, security, and the speaker. They said that this was in response to plans to disrupt the event.

Warwick Pride’s Treasurer claimed UWCA had their names highlighted ready. After the event, members from Warwick’s Tory society defended how the event was managed and said that it was privately organised.

Some LGBT+ protestors who had tickets were admitted. Zahawi spoke for roughly 20 minutes, while the music played clearly in the background, before a question and answer session. Questions were given via a QR code form and then read by the interviewer.

A Boar investigation found that of over 160 questions admitted to the moderator via the QR code, 26% concerned LGBT+ issues, with 36% about education and 8% about the economy.

Some were unhappy with the selection process, for example, Grace Lewis, Chair of Warwick’s Labour society, said: “Questions the Warwick Conservative Association chose to ask were not representative of those submitted via QR code and were purposely chosen to promote their own narrative.”

Joel Cooper, an activist attending the event, told The Boar he felt that somebody had to ask the Education Secretary about his past comments on transgender rights. He stood up at the end of the event, to objections from the interviewer, and asked Zahawi about previous statements the Cabinet minister had made about the importance of getting parents involved in child transgender issues.

Zahawi responded by saying that this was an issue that needed to be dealt with in a “loving” way. Earlier in the event, referencing the audible protests, he maintained that parents had to be informed about issues concerning their children. He declared that: “we must protect Trans rights.”

After the event finished, a UWCA member-only event began in OC1.04 next door. Protestors amassed outside and continued to blast music.

After the member-only event ended, Trans Action protestors continued to chant as Zahawi left the building.

Student opinions on the disruptions appear mixed on the night, with some opposing. One student that attended the first event told The Boar: “I understand some of Mr. Zahawi’s comments may have been offensive and upsetting to some. Yet surely there are more appropriate ways of challenging his opinion?

“Blaring music and ruining the chance of other students to listen to and question the Education Secretary – who like myself, nonetheless may have differing opinions to him – is not the way to go about such a thing.”

“This (the event format) was disappointing and we as a society were immensely underwhelmed both at the Minister’s responses and at the inability to ask our own questions.”

A Department for Education spokesperson told The Telegraph that the protests were “more evidence against those who say there is no such thing as a chilling culture on campus”.

In Zahawi’s speech at the beginning of the event, he spoke about his time as Vaccines Minister during the pandemic, and then about his experiences to date at the Department for Education.

Several days later, on 31 May, the story went national. The Telegraph was the first of the big newspapers to pick up the story. From there stories popped up about the protests in the Independent, The Daily Mail, LBC, The Sun and BBC News.

With the story now being shared across the country, the University released an official statement, also on 31 May.

They reaffirmed their continued commitment to: “Academic freedom and freedom of speech”, and “encouraging free and open debate”.

The University also claimed that they were “aware of plans for a protest at the meeting” and that “the event went ahead safely, despite it being noisy and disruptive outside the event”.

After the story hit the national press, Nadhim Zahawi put out a statement on Twitter defending Joel Cooper, the student who asked a question directly to the minister at the end of the first part of the speaker’s event. Zahawi’s tweet defended Joel as “very polite”, and highlighted that he had made a “reasonable point about how schools can help children which I was happy to debate.” The Education Secretary went on to highlight that: “His right to free speech is vital too.

“We will never deny biology but we must always show kindness, tolerance and love when discussing these issues”.

Cam Hall, former Head of News for Radio Warwick (RAW), went on BBC CWR on 31 May to discuss the protest further. You can find a version of the interview on the BBC Sounds website.

In the interview, Hall outlined the events of the night, and stated: “There was a designated space provided to them [Trans Action Warwick] outside of the room to protest, which is where they were throughout the evening.”

Meanwhile, a day later, on 1 June, one of the part-time Student Union (SU) LGBTQUA+ Officers, Noga Levy-Rapoport, went on Nick Ferrari’s show on LBC to defend the protests.

When asked by the host: “Why would you not at least want to hear what the man has to say?”, Ms Levy-Rapoport responded: “My role is to represent these students and to show that the entire LGBT+ students stand together at this university.

“Zahawi has very clearly expressed his transphobic views. Hearing him out further is not the moment for this to occur. Him attending this event and speaking wasn’t about LGBT+ rights, he has been very clear that he is willing to trivialise the detrimental impact of outing LGBT+ youth to their parents”.

Following the interview, Ms Levy-Rapoport tweeted: “Lots of people after LBC getting very vexed about my support for #TransActionWarwick protesting Zahawi. I was proud to attend. Feminism & LGBT+ rights are interlinked: fundamentally, we must challenge the essentialist gender hierarchy that wants to silence women and trans people.”

When approached for comment after the interview, Ms Levy-Rapoport re-affirmed many of the points made in the interview, including concerns about student admission into the event.

On 1 June, Trans Action Warwick released a new video on Twitter showing loud music being played in an attempt to disrupt the first part of the speaker event. The footage goes on to show the chants made as the Education Secretary left the building following the UWCA member-only part of the event.

The Tweet commented: “On Friday we disrupted Nadhim Zahawi speaking at the University of Warwick. This response should be natural for students. No to transphobia, resist gendered existence.”

Just over a week after the speaker event, the Secretary for Education, Nadhim Zahawi, wrote an opinion piece about the event in the Daily Mail.

In the piece, he outlined the importance of the right to free speech, whilst also stating that: “Free speech is not a licence to spread hate, intimidate others or shut down debate.”

Mr Zahawi then responded more directly to the protests at University of Warwick stating: “While the activists clearly intended to stop my speech and shut down the discussion, it has done precisely the opposite.

“I am now more convinced than ever that the chilling crushing of free speech needs to be countered.”

Whilst Mr Zahawi acknowledged that the group that chanted at him on the evening of the speaker event was relatively small, he later mentioned: “Most students were happy to disagree with me politely and respectfully and to engage in debate. But across too many campuses, there is a less tolerant approach.”