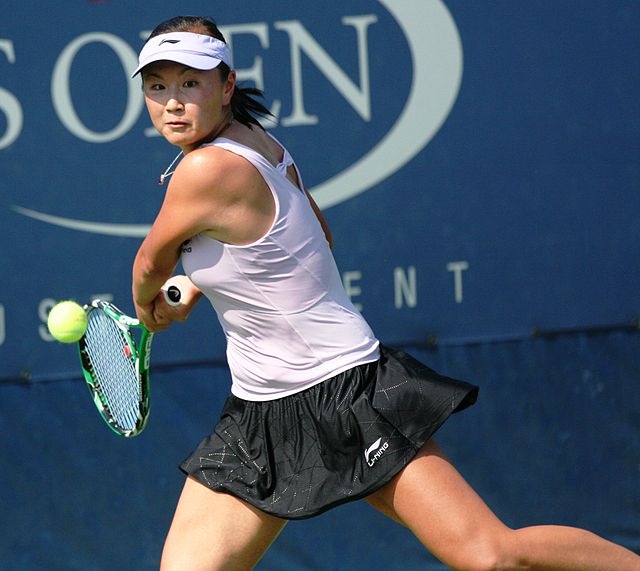 In wake of the #MeToo movement, plenty of women have come forward to talk about the sexual abuse that they’ve suffered at the hands of officials. As of April, around 400 sports coaches in France are suspected of abuse and, the following month, 200 gymnasts in Australia testified that they had suffered sexual abuse, weight-shaming, and bullying. In recent years, nearly every sport has been shaken by allegations and the uncovering of decades of abuse: however, concerns have been raised about ‘Chinese Princess’ of tennis, Peng Shuai, who disappeared for two weeks after she made sexual assault allegations against a leading Chinese government official.

Peng is a former world number one doubles player who has won two Grand Slam titles, at Wimbledon in 2013 and the 2014 French Open. She achieved a career-high singles rankings of 14 in 2011 and reached the US Open singles semi-finals in 2014.

On 3 November, Peng wrote that she was “forced” into a sexual relationship with former China vice-premier Zhang Gaoli on Chinese social media site Weibo. It was the first time that allegations had been made against one of China’s senior political leaders and concern grew when the post was deleted soon after. Many have suggested that the subsequent message, stating that the initial claim was untrue and everything was fine (relayed via state media), and Peng’s following public appearances were staged by the Chinese government. During her call with the International Olympic Committee (IOC), Peng claimed to be fine and asked that the media stop discussing her disappearance – although she did not address questions about her wellbeing or accusations. In an attempt to relax international concerns, the IOC reported that Peng was “safe and well”.

However, the organisation has been accused of staging a “publicity stunt” by human rights groups and the Women’s Tennis Association (WTA), in order to stop diplomatic boycotts of the upcoming Winter Olympics. A spokesperson for the WTA said: “This video does not change our call for a full, fair, and transparent investigation, without censorship, into her allegation of sexual assault, which is the issue that gave rise to our initial concern.”

As for whether or not it will lead to the boycott of the Winter Olympics, by the UK or other countries, that remains to be seen

Social media campaign #WhereIsPengShuai, which was endorsed by renowned tennis players Naomi Osaka and Serena Williams, is just the latest in controversies regarding the 2022 Winter Olympics, due to be hosted in Beijing. Already faced calls for boycott over human rights abuses committed by the People’s Republic of China (PRC) in recent years, such as the Uyghur genocide in Xinjiang and the silencing of protesters in Hong Kong. Human rights lawyer and former Olympic swimmer for Canada, Nikki Dryden, has called the latest public appearances of Peng Shuai a “media exercise” to dissuade concerns for her wellbeing. Activists, as well as social media users, have criticised the IOC for “participating” in a “charade” by the Chinese government.

On the other hand, Chinese state media have accused the West of using Peng Shuai as a pretext to criticise the nation, and the Chinese foreign minister spokesperson, Zhao Lijian, said at a press conference that there had been “malicious hyping” and “politicization” of the case. A state-run newspaper also reported that “anti-Chinese forces will converge to make trouble for China”, suggesting that concern for the tennis star could be used as a guise to criticise the People’s Republic of China. Following the outbreak of the Covid-19 virus in Wuhan, Sinophobia has been on the rise both on a domestic and international scale, which has led to plenty of ignorance regarding China. However, this shouldn’t detract from legitimate criticisms of China’s well-documented history of human rights abuse, as the country is currently experiencing what has been called the “darkest period for human rights since Tiananmen”.

While the Peng Shuai situation is still unfolding, it has highlighted the abuse faced by Chinese athletes and attracted the (unwanted) attention of the rest of the world. As for whether or not it will lead to the boycott of the Winter Olympics, by the UK or other countries, that remains to be seen.