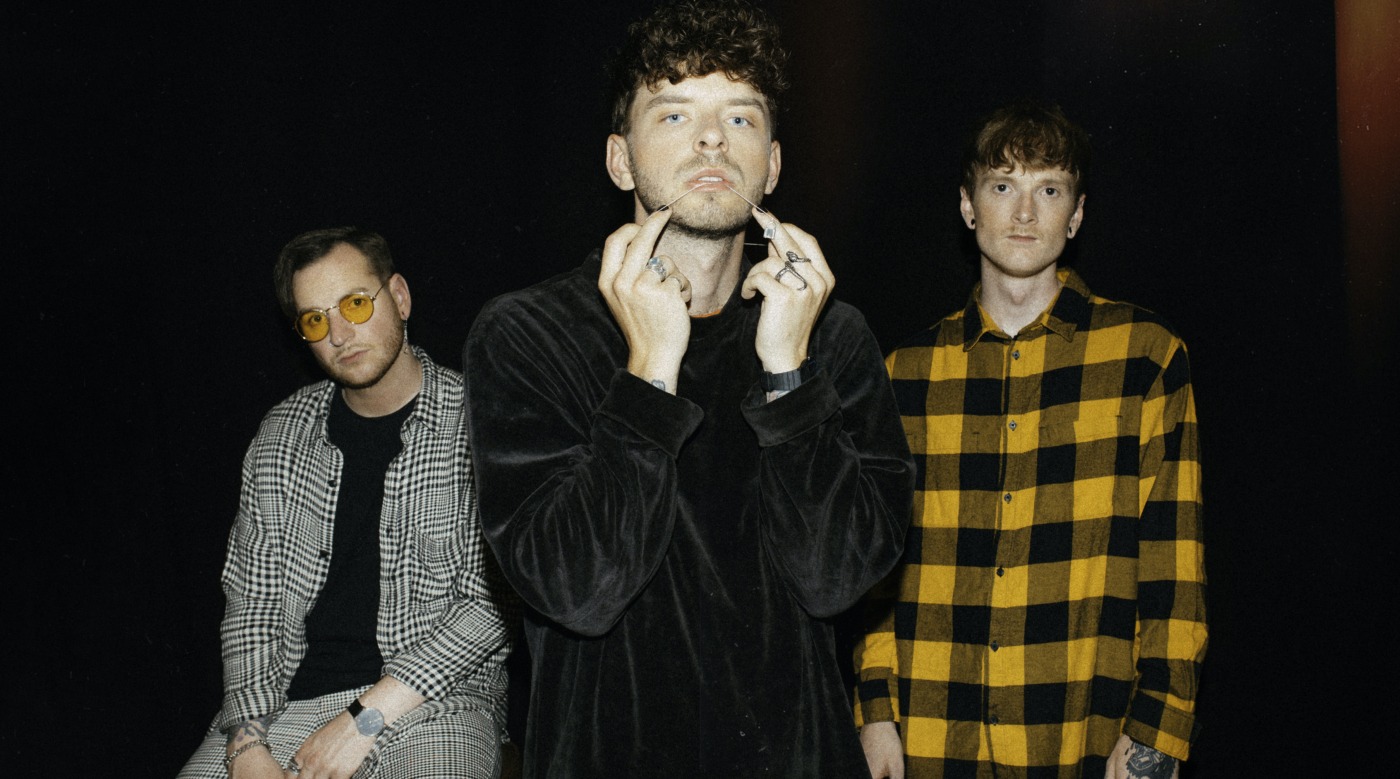 Philip Strand wants to bring you closer. If you’re a fan of his band Normandie, that’s great, but if not, he’s introducing himself in a spectacularly candid manner.

“The whole story of the album is if I open up to somebody, it’s going to bring that person closer to me,” he says. “That’s kind of the point of opening up to a person. That’s the lesson that people should learn from an album like this.”

Said album is Dark & Beautiful Secrets, the third full length from the Stockholm three piece since their formation in 2013. Its candour is but one strength of what’s on offer, especially since English isn’t Philip’s first language. It is an astoundingly slick, modern rock record that suits venues far bigger than the ones they are used to playing. It’s a love-at-first-listen record that still gets better the more time is spent with it, and one that boasts impressive variety while still keeping its toes firmly within the rock world. Early single ‘Holy Water’ takes no shame in being crafted by a musician who writes pop songs on the side (including Ireland’s entry for this year’s Eurovision Song Contest), while ‘Mission Control’ brings addictive dance-rock to the mix and ‘Renegade’ delivers an almost metallic chugging guitar line – and that’s only a third of the album.

I felt like I wanted to try something else with [‘Jericho’], so I switched it around to breaking up with the past…I knew as soon as the lyrics were changed for that song that this was going to be the personal album

It doesn’t sound particularly special to say that this record is one hundred percent Normandie, but while there are usually many hands at work on your average album, there were only six of them involved in the bulk of the making of Dark & Beautiful Secrets. As with their previous two albums, Philip produced Dark & Beautiful Secrets himself, but for the first time in the band’s lifetime, he shouldered the mixing duties as well.

“We just felt like the demos needed a polish,” he says, and that was all they needed. “I think we found the Normandie sound better this time. If you hear the album, it’s exactly what we sound like. It’s not a mixing engineer’s interpretation of what they think we want to sound like.”

It’s all Normandie from a lyrical perspective too. Philip committed himself to penning the most personal lyrics of his career this time around, albeit not consciously. It all began with lead single ‘Jericho’, which began as a more conventional break up song, an “easy route” Philip was used to exploring as a pop songwriter. Listen closely though, and it becomes apparent he isn’t breaking up with a partner at all. “I felt like I wanted to try something else with that song, so I switched it around to breaking up with the past, breaking up with everything that you’ve dealt with,” he explains. “I knew as soon as the lyrics were changed for that song that this was going to be the personal album.”

Over the course of these ten tracks, Philip delves into the terror of a panic attack (‘Hostage’), the conflation of love and lust (‘Chemicals’) and loneliness and introversion (‘Atmosphere’)

Performing archaeology on the past sounds like a struggle, but this was not the case for Philip, who speaks of his past assuredly and with striking frankness. “I didn’t really have any issues with backtracking and going through my past because I am so confident with [myself] and I know who I am,” he admits. “That was one of the things that made me realise that this is the time to actually go digging, because if you are very insecure about who you are, you don’t really know your identity. It could be troubling to dig into your past because you might find stuff that you are not really ready to face at that time.”

The lyrical themes of Dark & Beautiful Secrets are as diverse as the sonics of the record. Over the course of these ten tracks, Philip delves into the terror of a panic attack (‘Hostage’), the conflation of love and lust (‘Chemicals’) and loneliness and introversion (‘Atmosphere’). The latter song is perhaps the most revealing for Philip – “I feel more lonely when I’m around people, which is basically all the time,” he confesses.  “I like being alone – without it making any sense, that’s when I feel less alone.”

The eagle-eyed listener might pick up on the string of religious-sounding song titles on Dark & Beautiful Secrets: ‘Holy Water’, ‘Jericho’, ‘Babylon’. Central to the entire record, and the cornerstone of Philip’s exploration of his past, is his religious upbringing and his decision to distance himself from the church when he was fourteen years old.

“I felt like it was more poisonous for me to be in that community than being outside of it,” the now 28-year-old says. “In a way there was a little bit of a holier-than-thou mentality. The tighter the group and the more secrecy they have, the more holier-than-thou they’re going to be. When new people come into the church I had a feeling that people around me started judging that person because they weren’t born Christian. [There] was all this boiled-up pressure [to be] the most perfect person you can be and I didn’t really feel that.”

It spiralled into me having a really bad relationship with alcohol. All of that came from me trying to get as far away from religion as possible. It sure wasn’t what I wanted to do in my teenage years, jumping from identity to identity just to find myself

He also discusses the effect the mentality of the church had on him, the subsequent struggle to find his identity, and what the process of making Dark & Beautiful Secrets taught him about that experience. “It spiralled into me having anxiety for years. It spiralled into me having a really bad relationship with alcohol. All of that came from me trying to get as far away from religion as possible. It sure wasn’t what I wanted to do in my teenage years, jumping from identity to identity just to find myself. It hasn’t been very pleasant for the people around me. It all comes from me leaving church. That’s what I realised with this album.”

The record is out, but it won’t be till October that Normandie take it on tour, and Philip will get to hear his own confessions sung back to him by thousands of people at a time. Naturally, in an ideal world where there was no Covid-19 to get in their way, they’d be out on the road sooner.

“The timing [for the release] could have been better,” Philip says with a sigh. “Music these days dies pretty quickly. The initial first wave of impact from an album is over in a month.”

Seven months is a long time to keep an album’s momentum up, even for the very best ones. The solutions Normandie are thinking of will be good news for any big fans, however. With the band wanting to keep their heads in a creative space, album four is in the demo stage already and we may hear the first singles by October, if not the whole thing. For now, Dark & Beautiful Secrets is more than enough to tide fans over, and there’s plenty of time for it to entice new ones.